Of Truth, Art, and Drinking with Dave and Bill

Dave Gessner and Bill Roorbach –I suppose you can call them nature writers, but they are also just good writers — have embarked on a peculiar blogging adventure, blogging together as Bill and Dave’s Cocktail Hour, a salute to writing, reading, and drinking.  There is a decidedly irreverent tone to the site, though these guys are also pretty thoughtful.  Here’s Gessner with his take on the endless ‘truth and nonfiction’ arguments: 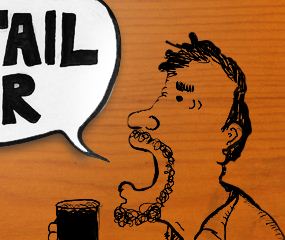 Should our stories be as factually accurate as memoirists and essayists can make them?  Of course.  Just because a thing is emotionally true doesn’t mean it can’t be factually true, too.  But at the same time a memoirist who says their sister had blonde hair when it was light brown shouldn’t be held to the same standards as Stephen Glass.  It is the nature of memoir and essay that memory is telling the story and these forms will never be as clean as journalism.  In the best literary nonfiction the true rules that need to be followed are artistic ones.  Those rules are developed in each individual book by each individual artist, and they should be judged that way, individually, not in a great hue and cry of moralistic oversimplification.  Yes, it is wise for writers of memoir to hew as closely as they can to the facts.  But my worry is that we will, as usual, overreact and learn too literal of a lesson.  That in rushing to rein things in we will choke off what is creative and alive in the form.

Which leads to a larger point.  So much of the disdain for memoir, and for other more personal forms of writing, has been disguised as something it isn’t.  What is presented as a moral criticism is most often really a matter of taste.  I have a sweet tooth for the personal, and I admit this, but it does not make me a bad person.  “I prefer the swamp to the desert,” said my old college professor, Walter Jackson Bate, paraphrasing, I believe, Coleridge.  Me, too.  But that doesn’t make the desert evil.  There are those who like cool jazz and those who like it hot.  For the most part cool jazz rules the modern nonfiction market and, with the one swampy exception of memoir, the majority of that cool nonfiction is polite, non-intrusive, journalistic and, of course, about something.

The rest of this post can be found here, but the site itself is well worth following on a regular basis.

You are currently reading Of Truth, Art, and Drinking with Dave and Bill at BREVITY's Nonfiction Blog.