Review of Small Fires, a Book of Lyric Essays 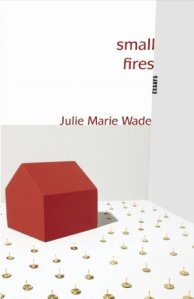 As a teenager in the 90s, I remember the anticipation of creating a time capsule. I recall sitting cross-legged with my two sisters sifting through a tattered cardboard box of memorabilia—jagged salt-crusted pebbles collected from the Dead Sea, sloppily written notes from friends, and a stuffed monkey in heart boxers from a long-forgotten boyfriend—attempting to find the perfect items that would one day define my life’s contributions to the unsuspecting person that would happen upon my capsule and understand the essence of me.

Julie Marie Wade’s Small Fires tells a similar story of her own time capsules that, much like the essays themselves, preserve self and childhood memories. Small Fires, a book of lyric essays, seamlessly incorporates Kantian philosophy, 1980s popular culture, and poetic explorations of words and meanings. Wade’s word choices and descriptions are impeccable, leading her reader on a rhythmic walk through the landscape of life as she explores what we give up to become who we are. Her exquisite language is not limited to word choice, however, but expands to the ways she plays with ordinary words and ideas such as waffle: a breakfast food or a verb “to switch back and forth between possibilities,” she writes, and camouflage as a metaphor for hiding who we are. Wade plays with the ideas, sounds, and feelings of words in a way that only a true poet can, sounding like a woman who not only loves language, but one who knows language well.

I could often see myself in Wade’s memories. As a teenager who similarly loved words and struggled to understand arbitrary limits imposed by adults, I found myself nodding in agreement at her tumultuous recollections. For this reason, one of my favorite elements of Small Fires is Wade’s use of triptychs, which skillfully knit a threesome of narratives together to craft compelling vignettes of endearingly multidimensional characters. Wade was clearly the center of her own universe, but the likable characters add to the palpable tension between the angst-ridden teenager and her well-meaning relatives. Small Fires is a heartfelt exploration of complicated relationships.

In learning that I grew up in the same era as Wade made her recollections more powerful—her exploration of loss, longing, and estrangement more graceful and truthful.  She weaves references to Punky Brewster, Shakespeare, Immanuel Kant, and George Bailey (It’s a Wonderful Life) beautifully and seamlessly into questions of family, religion, gender, sexuality, and identity. Small Fires is a book of essays that left me transfixed and transformed through brilliant prose and ideas. It’s like finding a time capsule of nostalgic treasures.

Emma Nelson is a graduate student at Brigham Young University studying American literature and culture. She teaches several writing classes and writes personal essays that combine her love of family, nature, and memories.

§ One Response to Review of Small Fires, a Book of Lyric Essays

You are currently reading Review of Small Fires, a Book of Lyric Essays at BREVITY's Nonfiction Blog.