The Ultimate Guide to Not Letting the AWP Do You 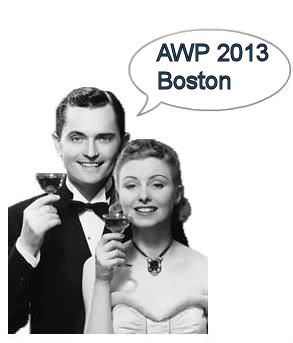 I arrived in Chicago last year for my first AWP with a hazy plan and a suitcase that weighed too much and cornered poorly. I packed stilettos, cigarettes, scarves, and lipstick, but forgot my laptop, cotton swabs, and new business cards stamped with a retro typewriter logo. Forgetting cotton swabs on a trip is a bad omen indeed. My plan was breezy and vague: oh, I dunno—find some authentic deep-dish, go to a few panels, say smart things, be charming, and have literary types fall in love with me. If there’s time, wrangle a book deal.

I’ve never been comfortable networking-as-a-verb, but my skills in this area hadn’t evolved since my 20s — awkwardness masked by flirtation. Incidentally, I gleaned this approach from an Anne Sexton biography that I read over ten years ago and interpreted not as a cautionary tale but as a primer on sex and dating.

I managed to get my AWP tote bag and lit swag, grab a slice served in a cardboard triangle, and check-in to my hotel room, all without incident. But it wasn’t long after I had gotten to my room, scarfed the pie, and lined up my little sentry of toiletries by height, that I found myself overwhelmed and on the verge of panic. The conference hadn’t even started, and this was not my usual existential panic, but an actual can’t-leave-the-room-and-function-in-public panic.

With nothing to do but strip down to my underpants and smoke in bed, I flipped through the 10-pound conference tome and tried to dam the tears with self-ridicule. I’ll spare you most of the rest of my mega-conference meltdown, but I accomplished little and went home an exhausted rube. Unable to navigate logistics capably, I ended up in the wrong panel at least a half-dozen times (each in the wrong genre and with a title more obtuse than the last); told Sven Birkerts his book The Art of Time in Memoir was “cool”; skulked around the book fair like a nervous woodland creature; collected business cards that would ultimately flounder in the bottom of my tote bag; and shouted “Hi!” to Cheryl Strayed in an elevator. (That’s it—just “Hi!” followed by a pregnant ellipsis. I should’ve told her I loved her or thanked her for “writing like a motherfucker”…something memorable.)

On the last night, I got invited—by way of the etiquette equivalent of the service elevator—to a VIP reception. Laureates, Pushcarts, NEA fellows, and National Book Award winners would be there: I was going to that room, the Gatsby room. Once there, however, I bored of the pomp and circumstance and sulked in a corner, popping cheesy poufs and getting hit on by a grandfatherly poet who mentioned his “new and selected” no fewer than eight times.

It’s redemption time now—a new year, a new me. I can do AWP: I just need a better plan.

First, a pep talk. Having spent much of my later childhood and high school years in Boston, I know the language, the land, the people, and customs. Home turf advantage. Also, I come from a military family—my husband, brother-in-law, and father—all no-nonsense types. This can-do competency must live in my muscle memory, right? Early wake-ups, hospital corners, overnight hiking trips in rugged New Hampshire mountains, extensive travel, and scrapping for respect in a big Catholic family: this was my childhood training. Dad was a recon Marine, for chrissakes; I can’t get pummeled by a writers’ conference.

Next, a plan and some rules of engagement. Instead of waiting until there, I grab my planner and Ned Stuckey-French’s “Handy Guide to Nonfiction Panels,” and I highlight. I highlight like a motherfucker. I pick two panels per day and write them into my planner in tidy block print. Anything extra is gravy, but these two are non-negotiable. My schedule is set and reconnaissance complete.

The rules of engagement are simple: no side trips to Fenway Park; no hesitant lollygagging at the book fair (get in, get out—with solicitations and business cards); no window shopping on Newbury Street; no improvised chit-chat with famous writers; no panel reconnaissance on the fly, flipping through maps and schedules while bent over a subway grate; no sulking or crying; and no reading of panelist bios until I am safely extracted and home.

If I seem a little more serious this year, that’s my plan. I am on a mission: do AWP, don’t let AWP do me.

—
Alexis Paige’s writing has appeared inTransfer Magazine, 14 Hills: The SFSU Review, Seven Days: Vermont’s Independent Voice, Prison Legal News, Ragazine, and on Brevity’s Nonfiction Blog. Alexis was twice named a top-ten finalist of Glamour Magazine’s annual personal essay contest. She received an M.A. in poetry from San Francisco State University and is pursuing an MFA in Creative Nonfiction from the Stonecoast low-residency program in Maine. She is at work on a memoir about how 749 days in the Texas criminal justice system taught her to grow up. She lives and teaches in Vermont.

You are currently reading The Ultimate Guide to Not Letting the AWP Do You at BREVITY's Nonfiction Blog.