Of Intimacy and Faith: Love & Salt 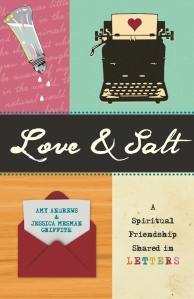 A guest review of Love & Salt: A Spiritual Friendship Shared in Letters, from Brad Modlin:

At the conclusion of grad school, Jessica Mesman Griffith and Amy Andrews took a risk: they decided to be friends. They “barely knew each other” but in the final days of school, recognized the beginnings of a powerful bond. Inspired by a promise between the Biblical figures Naomi and Ruth, the two vowed to grow closer together even as they moved geographically apart. So they wrote letters.

Love & Salt: A Spiritual Friendship Shared in Letters is the collection of those letters. Entirely epistolary, the book begins during Lent, when Amy is preparing to convert to Catholicism and Jess is sponsoring her from hours away. Rather than giving up chocolate, each woman commits to handwriting a letter a day to the other.

Hence the letters from the beginning are personal discussions of faith. What does it mean to be Catholic? Amy wonders. And Jess, Catholic from the cradle, wonders that too. Each woman is honest about both doubts and belief, and the reader soon draws the parallel between the risk of their friendship and the risk of committing to a God whom neither woman can ever fully know.

Such discussions could easily have become so insular or heavy that they dragged the memoir down, but the letter format creates 1) an intimacy that makes the reader an insider and 2) an immediacy that allows thoughts that are heavy and light to occur almost simultaneously. Today’s doubt or sadness is replaced by tomorrow’s levity.

That immediacy also helps to depict the texture of their faith lives. They make lofty plans, but the next day they fall short of them. Jess means to make grand 5:00 am prayers like a saint, but instead she—in an action that endears her to me—hits the snooze button until she’s running late to work. She writes:

I must face the fact that I’m not a nun but a wife and a working girl…[T]he real challenge is not to love and desire God when I’m prostrate in the dust but when I’m in an excruciatingly dull meeting on the tenth floor [at work], or when I’m eating dinner in a chain restaurant with my mother-in-law.

The circle image reflects the book as a whole—as together the two friends learn and relearn lessons and re-endure spiritual seasons, some of them tragic. While the 360 page-count may give some would-be readers pause, the cyclical nature of experience requires it. Besides, the pages are sprinkled with so many lyrical sentences and beautiful, succinct ideas that you’re glad for the book’s length.

If you’re like me, you’ll end up writing your own little letters in the margins of theirs and, every two or three pages, underlining a moment you want to come back to. Such as when Jess writes:

Today while procrastinating at work, I was reading the Gospel of John, and I got stuck on the verse “For God so loved the world…” This may be all I have in common with God, but I do so love this world—and I don’t just mean my family or the majesty of creation, but the Boston song that’s on the radio as I write this.

Brad Modlin’s poetry, fiction, and creative nonfiction have appeared in Denver Quarterly, Indiana Review, The Florida Review, The Pinch, and River Teeth, among others. He holds an MFA from Bowling Green and is a PhD candidate in Creative Writing at Ohio University

§ 2 Responses to Of Intimacy and Faith: Love & Salt

You are currently reading Of Intimacy and Faith: Love & Salt at BREVITY's Nonfiction Blog.