Every once in a while an obituary is itself an intriguing and engaging essay, as shown here, posted to Facebook today by Nick Flynn, author of Another Bullshit Night in Suck City.  Notice the voice, the intimate detail, the surprise, the attitude.  Presumably Nick wrote this, though it was not attributed: 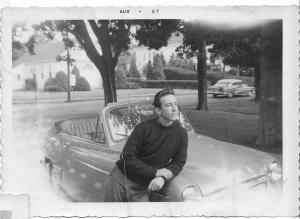 JONATHAN ROBINSON FLYNN, the self-proclaimed “greatest writer America has yet produced,” died on a Sunday morning at the end of October in Boston. At the time of his death he was living at Roscommon, the nursing home where he’d spent his last five years of his life.

He was the subject of his son Nick Flynn’s 2004 memoir, Another Bullshit Night in Suck City, which chronicled his father’s life as an absent father, a bank robber, and as a federal prisoner, as well as the five years he lived as what we now call “the working poor,” sleeping in shelters and on the streets of Boston, working day labor. He made it off the streets with the help of several social workers and organizations, including Eileen O’Brien of Elders Living at Home, Jim O’Connell of Health Care for the Homeless, The Pine Street Inn, and many others. His success in getting of the streets is a model for the current Housing First movement, which has the potential to end homelessness in America.

Jonathan Robinson Flynn was born in 1929 in Scituate, Massachusetts, and always had a complicated and contentious relationship with his own father, Edmund Flynn, although Jonathan was proud that his father had, in response to the sinking of the Titanic, invented the life raft—the Titanic only had life-boats.

A ghostly, inscrutable, charming, frustrating, narcissistic, alcoholic, damaged, and damaging presence, Nick Flynn tried to understand his father in nearly all of his writing, especially in the subsequent memoirs, The Ticking is the Bomb and The Reenactments. Jonathan spent most of his life on the East Coast, between New Hampshire and Florida, often working on docks or on fishing boats in order to support his writing and his drinking. While serving time in federal prison it is likely he was subjected to CIA-funded torture experiments, which likely contributed to his later paranoia. After prison, he remained in Boston for the last 25 years of his life.

Being Flynn, the feature film based on Another Bullshit Night in Suck City, starring Robert De Niro as Jonathan Flynn, was released in 2012. Jonathan was impressed with De Niro’s performance, and enjoyed imitating De Niro (“You are me, I made you”) as he taunted Paul Dano, his on-screen son.
At the time of his death Jonathan Flynn remained convinced he would win the Nobel Prize for “both storytelling and poetry.” His one completed novel, The Button Man, remains unpublished. Along with his son Nick, he is survived by another son, Thaddeus, as well as a daughter, Anastacia.

For no good reason he outlived both of his ex-wives.