On Turning Down Reading Invites: What’s a Writer’s Time Worth? 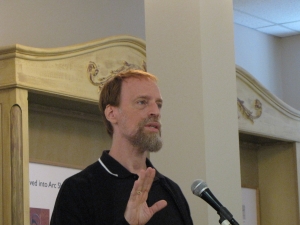 Years ago, when I was speaking on a panel at the Jewish Community Center in Pittsburgh, I met the writer Evelyn Torton Beck, who was personable, wise, and funny.  She was the first author to talk to me about accurately assessing what my time was worth when I was invited to speak out of town.

It’s not just the day you’re there, she said, if it’s only a day.  It’s the day before, getting ready, and then at least one day of re-entry into your regular schedule, sometimes more, depending on how complicated your visit was.

I’d never thought of doing a gig in those terms and it was immensely helpful.  Like the time I was invited to speak in San Francisco, and the speaker’s fee was good.  But that’s as far as it went: they weren’t even offering to cover hotel and meals, just air fare and “home hospitality.”  The latter is extremely iffy.  The one thing I crave on the road is privacy, since I’m constantly on stage.  I really wanted to do the gig, especially since I hadn’t spoken in San Francisco for a long time, but then I thought of the jet lag I’d be dealing with, and to me that doubled the time involved.  I simply wasn’t being compensated enough for how much I’d have to put into it, so I said no.

Saying no isn’t easy for writers.  I’ve had many discussions with other authors and this is a subject that comes up again and again.  Part of the problem is that when we start out, we tend to say yes to everything because we crave the exposure, and somehow feel it will magically boost our careers.  We want the attention, the recognition, the respect, and hopefully the  sales that might result.  Our hopes can create a habit of saying yes.

Other writers may have different questions that help them decide what to do and where.  But these work pretty well for me, and have helped me turn down gigs that I was sure later on I would regret doing.

One more thought.  The late poet Terri Jewell and I used to talk about the writing life a lot and she taught me an elegant way of saying no to things I didn’t want to do: “Thank you for asking, but I’m booked.”  It gracefully closes the discussion and I’ve used it more than once to good effect.

Lev Raphael is the author of 24 books in many genres: memoir, mystery, literary fiction, short fiction, advice for writers, essay collections, historical fiction, horror, psychology, biography, a teachers guide, and literary criticism.  His books have been translated into a dozen languages and Deborah Dash Moore, head of Judaic Studies at the University of Michigan has hailed him as “a leading figure in American-Jewish Literature.”

§ 3 Responses to On Turning Down Reading Invites: What’s a Writer’s Time Worth?

You are currently reading On Turning Down Reading Invites: What’s a Writer’s Time Worth? at BREVITY's Nonfiction Blog.