An interview with Richard Gilbert, author of Shepherd: A Memoir, discussing the hard work of finding a book’s center, being a first-time author, and the beauty of farming.

Dinty W. Moore: I know that Shepherd took many years to write, and that you worked your way through numerous revisions. How did the core of the book change over time? Are the questions at the heart of this book the same questions you had in mind the day you started?

Richard Gilbert: At first, the book amounted to linked essays straining to become a narrative. It was partly a critique of academe and Appalachia, partly family history, partly how-to, partly farming memoir. I had much to say, and was in good voice, but created a herky-jerky experience for the reader.

Buried in this welter was my intuitive sense, from the start, that the core of this story was my relationship with my charismatic, distant father—especially the twin legacies of his farming adventures and his father’s suicide. As those aspects slowly came into focus and prominence during the writing, I saw that my own temperament and portraying it were related puzzles that needed more conscious attention. I struggled to weave these elements into the foreground narrative about my own farming in a lovely, challenging region

After I’d written three versions, I hired Bill Roorbach as a book doctor. He taught me how to use my retrospective self a bit more, resulting in a wiser and more sympathetic persona; how to drive more narrative threads through more chapters; and how to more fully dramatize my experience. Later, structure played a huge role, specifically in where and how my father was deployed. I learned a lot in that regard from studying Cheryl Strayed’s memoir Wild.

By the end, I was repeating the mantra, “This book is about dreams, loss, farming, and fatherhood.” I had to get a lot down on the page to see those focal points. Leslie Rubinkowski, one of my MFA mentors, once told me, “I keep working to make it simple.” I learned what she meant.

DWM: You had worked in publishing for many years prior to starting Shepherd, and so you already knew plenty about how books come to be written, placed with publishers, edited, and sent off to bookstores.  What did being on the author end of the transaction teach you that you didn’t know before?

RG: How in the dark you feel after handing your book off, how the process is mysterious and moves on mysteriously and with minimal input from you. This is partly incidental on the part of publishers and partly intentional.

When I was a publicist at Indiana University Press and later marketing manager of Ohio University Press/Swallow Press, I was far too busy to educate authors. Looking back, maybe I was impatient sometimes because I was overly wary of stirring up “difficult” authors. In that case, I’d let them know that we wanted the best for our book. I didn’t realize how thoroughly serious writers know their books and also welcome fresh ideas, though I did try to tap their knowledge with an extensive questionnaire.

As an author, it felt odd when my input, if it was sought or offered, wasn’t in any way binding—and might not even be responded to. It was their book, and thanks very much.

Overall, however, Michigan State University Press was incredibly receptive to my ideas. I got to choose between two covers, which is unusual, got the back cover I wanted, heavily influenced the book’s interior layout, and enjoyed working with editors to revise my sentences. At the same time, I now wish press staff had protected me from myself in some instances. I supplied the catalog copy, but probably revealed too much plot, my pitch having been based on my book proposal for editors. And my one-line bio that appeared in the catalog was too minimal—that’s what Amazon.com and others will use. Duh! A crisp three-line bio is a strategic promotional asset. So a dialectic between author and publisher is ideal.

Although I’d had a lot of publishing experience, I was rusty. And I’d never been a book author. Everything looked and felt different from that side of the fence. The learning curve principle applied: in a new situation, your usual competence is at first diminished.

DWM: What do you miss about farming? 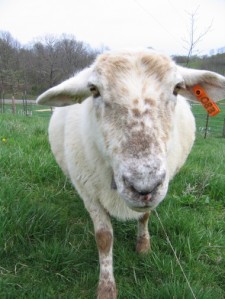 RG: In the spring, when the trees bud and there’s that gold-green haze on the domes of the woods, the landscape grown soft again, I get the fever. Which is somewhat weird to me, because spring stressed me out terribly. So much to do. In the book I write about deciding that, for farmers, there really are only two seasons—winter and summer, with spring and fall as mere transitions. And transitions are killers. You have to quit what had been working. Reposition. Start over.

But I miss lambs and baby chickens! How I miss the lambs, their soft warm bodies in my lap as I tagged them, their frisking about, their baaing at their mothers to come to them. And there was always such a potent secret drama going on that nobody else knew about. You got caught up in it—miracles happening everywhere you looked. And problems to attend. By the end of lambing you were exhausted, and the lambing pasture was trashed with drying and rotting afterbirth attracting flies.

Yet there were fresh fields coming on, full of tender grass soaking up solar energy, and the cycle felt so forgiving. You danced with such elemental forces.