My Very End of the Universe: The Absent Father

Installment two of our author interview series celebrating our new “flash” cousin, My Very End of the Universe: Five Novellas-in-Flash and a Study of the Form, new this month from Rose Metal Press, features Tiff Holland interviewing Meg Pokrass, about Pokrass’ novella in flash Here, Where We Live: 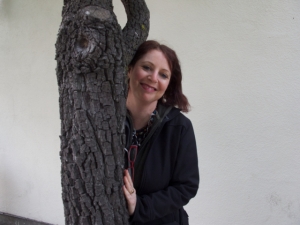 TH: Meg, the most interesting character to me in your novella was initially the father—his extreme presence in his absence. You mentioned to me once that you did not know your own father. Did you imagine him to be like this father?

MP:  No, I did not imagine my father to be like the father in this novella at all. I wrote this absent father to be what who I wanted my father to have been like. I imagined how a girl, overwhelmed by so much worry and conditional difficulty, might cultivate memories of a dead parent and use them as life rafts. The father remains my main character’s backbone—a force that has some influence in balancing out her difficult luck.

TH: What moved me most about him is that he “died making an old building new.” After reading the novella, I recognized that the narrator is like the father, thus his pull. She’s trying to be a fixer, too. Did you envision this all along?

MP: I was a “fixer” as a kid, yes. I didn’t really envision writing the main character as me, but that is how the character developed. This happens to me a lot. I try to write someone very different from myself, but it ends up being a kind of self-portrait. I wish I could say it was intentional. Writing a character unconsciously becomes, at least for some writers, an internal portrait of ourselves at different ages.

TH: Talk about the role of luck in the piece? I love the line “On our stoop, luck cleared its throat like a Mormon missionary and walked away.”

MP: Thank you for saying so, Tiff. I have always been fascinated with luck. Scientists can’t study it, you know? Our lives are determined by luck from the moment we are born. Wisdom matters, making good choices is huge, but luck is annoyingly present throughout our lives. All of this stuff we believe we can control is mostly wishful thinking. Sure, we can influence the way things turn out, but we can’t do anything about luck.

TH: Did you write the pieces chronologically with the novella in mind?

MP: No. I patched it together from a lot of old stories and poems, wrote some new ones, and wove chronology into it. I reshaped certain chapters/stories to fit into different time frames. It still feels a bit mysterious to me, how it all came together. I had been writing it for years, but didn’t know it.

TH: This isn’t just another coming-of-age novella, this is a novella about active creation/invention. The characters, seen and unseen, stay with you.

MP: Thank you! I’m really glad to hear this. I was strongly influenced by Tennessee Williams’ plays when I was an actress. I studied his beautiful lines and heartbreaking characters. But I was mostly fascinated with the importance of the absent father in The Glass Menagerie. I am glad that the absent father’s presence looms large in Here, Where We Live.

You are currently reading My Very End of the Universe: The Absent Father at BREVITY's Nonfiction Blog.