No Room of One’s Own 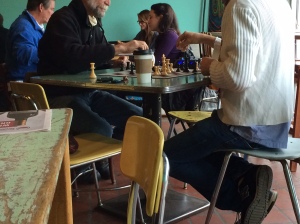 The moment I remember most from grad school was sitting at a local restaurant, after a reading from a noted writer. I was at that time fighting my biological clock, at the stage where babies passing in strollers and babies in the arms of others and even babies in saccharine television commercials made me weep with a weird, unwelcome longing. The noted writer had a child, and I asked her, or rather told her in the way that grad students assert their beliefs, “I’ve been thinking about having a baby but I worry that it will take all my writing time.”

The writer said, “I worried about that, too, but actually he makes me use my time more wisely. I used to wake up whenever, read the paper, make breakfast, linger with a cup of tea, and now it’s like He’s down for a nap I have 20 minutes GO! It really is how you use the time.”

It’s been years since grad school, and I’m in the process of leaving my more-than-full-time job to focus on writing. The leaving is harder than I thought it would be, given that I’m self-employed and trying to pass a successful business to another person. Plus, I like it. I’ve freed up some time, but more writing does not seem to be happening. I’ve taken on hundred-hour editing jobs, desperate to still make money despite having a supportive partner with a decent salary, despite having saved for years to make a cushion large enough to give me a year, perhaps two, without having to hafta-hafta-make-money.

Clearly, it’s not a need for solitude that’s hindering me. Yet moving into a new life, accepting writing as my job, feels strange. Shouldn’t I sit at a desk, contemplating wildlife through my window until the spirit moves me? Shouldn’t I be taking X hours per day, five days a week? Going to the coffee shop without having to escape anything doesn’t feel like I’m doing it right.

At the Los Angeles Times, Susan Straight writes on the mythos of a room of one’s own, and how she instead fit writing into the physical and temporal spaces that she could:

I wrote in my green Mercury Villager van, with headlights that made it look like a shark at night, according to the girls who waited for me to pick them up from practice for everything children can practice for. For 24 years I wrote not while driving but while waiting in parking lots for hours — basketball and tennis and doctor appointments and hospitals, Girl Scouts and plays, driving exams and prom nights (2 a.m.! A whole chapter!), writing in my notebooks.

…The whole time, I waited to be alone. Writers were alone. They woke with the sunrise, drank coffee, wrote alone, thought alone, listened to music they chose, and in the evening drank something impressive while writing into the night. Alone. Real novelists, those we admire, those we consider timeless in their language and character and scene, those who receive accolades for inventive language and form, have writing lives we imagine in specific ways. I imagine these, even now, listening to writers being interviewed.

I joked all the time about writing in my car, about never having been to a writers colony but having finished my third and fourth novels in cheap motels…

I write in coffee shops, having found the quietness of my own room unbearable. I want to look up and see other people also writing, or studying, or thinking, or chatting. I write in my car on long stretches of interstate, irresponsibly scribbling one-handed on a napkin against the steering wheel, trying not to honk the horn. I write while walking, repeating a sentence or a story over and over to remember it until I get to paper or the keyboard. And I try to remember, it’s OK, as long as you’re doing it, you’re doing it right.

Read Susan Straight’s essay On Learning to Write Without a Room of One’s Own.

You are currently reading No Room of One’s Own at BREVITY's Nonfiction Blog.