The Myth of the Real Deal 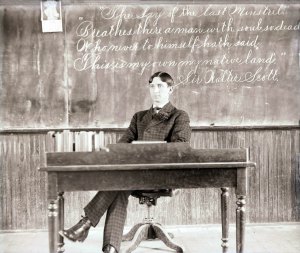 Well, if you can’t impress me, you’ll never make it!

When I entered my MFA program in 2003, I hoped I might be a literary success in the making. Though I had only written a handful of short stories, I imagined that a two-year writing program would provide me with the structure I needed to complete a book-length manuscript, and after that I’d have it made. I’d find an agent and land a publishing contract. I might not make the bestseller list right away, but I’d have a steady, respectable career. At the time, this seemed like a reasonable dream.

Surely I was the kind of student that Ryan Boudinot writes about in his recent essay in The Stranger, “Things I Can Say About MFA Programs Now That I No Longer Teach in One,” in which he groups his former students into two camps: the readers and the Real Deal:

The vast majority of my students were hardworking, thoughtful people devoted to improving their craft despite having nothing interesting to express and no interesting way to express it. My hope for them was that they would become better readers.

Either you have a propensity for creative expression or you don’t…The MFA student who is the Real Deal is exceedingly rare, and nothing excites a faculty adviser more than discovering one. I can count my Real Deal students on one hand, with fingers to spare.

Though I desperately wanted to be the next “Real Deal” in 2003, it’s clear to me that I would have fallen into Boudinot’s earnest-but-uninteresting category, the type of student who should be reading instead of writing.

The title of Boudinot’s essay suggests that he will reveal unspoken truths, and yet his essay does little more than reflect an elitist mythology that is far more toxic to our writing programs than students who don’t care to read all 1,079 pages of Infinite Jest. While it is certainly true that “writers are not all born equal,” it is odious to assert that

a) a select few students are talented enough to write

b) Ryan Boudinot himself or any other writing teacher is capable of identifying who those students are.

I teach creative writing at a two-year community college and every year at least a dozen of my students enter my classroom with dreams of their own. They want to make a living telling stories about their drinking buddies, or they want to be the next J.K. Rowling, or they plan to attend the Iowa Writers Program some day. They arrive in my classroom with the same naivete I brought to my own MFA program over a decade ago, and they want to know if they might be the next Real Deal. Sometimes they ask this indirectly with the looks on their faces, or by showing up to my office hours every week. Sometimes they come out and say: Do you think I’m good enough?

Luckily for me, I don’t have to answer that question. I am a teacher, not a gatekeeper.  I tell them all that writing is a lot of work, and that if they’re called to it then, absolutely, they should write.

Over and over again, students have proven to me that I cannot accurately judge anyone’s talent over the course of a quarter. I’ve had students write fragmented, cliché-ridden stories for eleven weeks and then somehow, through what appears to be a miracle but is more likely the result of diligence, present a portfolio of eloquent, succinct work. I’ve had students write compellingly about the relentless boredom of war, about being raised by meth addicts, about coming of age in the forest, always because these were stories they needed to tell.

It’s odd to me that Boudinot found that most of his students have “nothing interesting to express,” because in my experience the opposite is true. Every student has something to say that would be of interest to some group of readers.The challenge of teaching is to help them identify which of their stories need telling.

It’s true that of the MFA cohort I studied with, not a single one of us has become the next literary superstar. Not one of us has a book on the bestseller list. Not one of us has won a National Book Award or a Pulitzer. Plenty of us have moved on to parenthood and day jobs, and many of us have given up on being full-time writers, but nearly all of us continue to write and publish. Collectively, we’ve published novels and poems and memoirs; we’ve published essays and blog posts and op-eds. Though we may have grown up and revised our definitions of success, we remain committed to the work of telling stories.

Much has been made in recent years about the perceived glut of MFA programs in the U.S., as if the world has too many writers, as if only a select few have a right to be taught and be heard. But what happens when students walk into the classroom and their teacher is scouting for the next Real Deal? How does the teacher decide who is Real and who is not, and who does he privilege, who does he silence in the process?

Jennifer Berney is a queer mama, writer, and teacher. Her essays have appeared in Brain, Child, Nailed, and Mutha Magazine, among other places. She lives in Olympia, Washington, and blogs at Goodnight Already. You can find her on Twitter @JennBerney.

§ 85 Responses to The Myth of the Real Deal

You are currently reading The Myth of the Real Deal at BREVITY's Nonfiction Blog.