A Review of R. Claire Stephens’ Lady in Ink 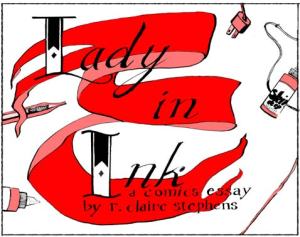 Several years ago, Ira Sukrungruang emailed me to ask me to contribute an essay for an anthology he wanted to put together about essayists writing about their tattoos. I really, really dig Ira’s work, and I really admire the magazine and chapbook publisher Sweet, which he co-created, so I was honored to be asked and onboard for anything he had in mind. The only problem was, I didn’t have a tattoo.

Still, I really wanted to be a part of this anthology, so I started planning. I could get a tattoo and write about the experience, I thought. Treat it like a literary journalism project. Research tattoos, figure out exactly what I wanted and where, pay close attention to the tattoo parlor and the process itself. This could be great, I thought.

My wife is usually really good about subtly discouraging my terrible ideas, but this one didn’t even merit her customary, “Are you sure?” Instead, she flat-out replied, “That is a stupid idea, and you’re not wasting our money on it.”

My wife was, of course, right. I didn’t actually want a tattoo—I wanted to work with Ira Sukrungruang, because Ira’s awesome. But permanently altering my appearance—even in a way that could easily be concealed by a T-shirt—was probably not the best way to work with a writer and editor I admire. Especially considering the fact that the anthology itself didn’t wind up happening.

I am happy to say that I have since had plenty of opportunities to work with Ira, and that in fact he recently asked me to review Sweet’s latest chapbook, R. Claire Stephens’ Lady in Ink: A Comics Essay.  This illustrated essay, coincidentally enough, is also concerned with tattoos. And identity. And sexuality. And all sorts of other ideas that come to mind as the essayist considers and illustrates the illustrations on her own skin and the skins of others.

While graphic novels and graphic memoirs are widely read and celebrated, it seems to me that the graphic essay—that is to say, sequential art more concerned with ideas than story—is a relatively new form, and so Stephens is to be commended as something of a trailblazer. But this chapbook has more going for it than mere novelty—it also happens to be really, really good. Stephens writes that, “I thought a tattoo might give me control—over my fear, but also over what men saw when they looked at me. I wanted confidence, composure, violence of spirit.” That getting a tattoo did not automatically transform her into a brave and confident warrior woman is one of the themes of the entire essay, but paradoxically the work also demonstrates a writer and artist who seems both skilled and fearless. The sequential art used to render scenes and action is clear and detailed, as is the art that is used to illustrate the essay’s ideas. I have, at times, read autobiographical comics that I thought did not actually need to be illustrated—they would have worked just as well in plain prose. But Stephens’s subject matter obviously lends itself to an illustrated treatment. What’s more, Stephens’s art is as strong as her writing is—and that is quite strong indeed.

I have always had a certain admiration for people who get tattoos. I’ve always felt that getting an image or phrase or word etched into one’s skin was a sign of knowing exactly what mattered, what was so important that it needed to be permanently displayed. That’s one reason why my wife was right to tell me getting a tattoo was a bad idea for me—I don’t really have an image or phrase or word that matters that much to me (and getting my wife’s name tattooed onto my arm would seem to just invite disaster—Wino Forever, anyone?). But the most powerful reflection in Lady in Ink comes from Stephens’s admission that, in fact, her tattoo did not demonstrate confidence—it was, instead, an act designed to inspire confidence, a display of a strength that didn’t actually exist for her. At least not at the time. It’s in this revelation of uncertainty and possible weakness that, in fact, Stephens demonstrates her strength as both a writer and an artist.
___
William Bradley‘s work has appeared in a variety of magazines and journals. His essay collection Fractals is now available for pre-order from Lavender Ink.

§ One Response to A Review of R. Claire Stephens’ Lady in Ink

You are currently reading A Review of R. Claire Stephens’ Lady in Ink at BREVITY's Nonfiction Blog.