On “the Terrible Efficiency of Gaslighting” 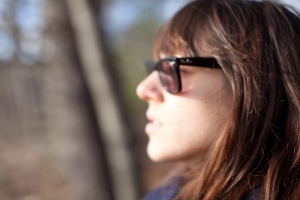 On Saturdays, my mother brought me to the fabric store where she worked and taught me to measure yards. At home, the sewing machine whirred us to sleep, as my mother stole moments of creativity for herself. Slivers and scraps of fabric became something else entirely when stitched together—somehow more whole. As the work grew, stretching across the dining room table, we ate in the kitchen, displaced by quilts. Batting done, borders hand-sewn, the quilts disappeared, re-appearing with blue ribbon awards at the local quilt fair.

My mother stopped quilting after the divorce. She resigned from her position as a teacher and sales associate at the local fabric store, and returned to nursing. The connection was not made explicit, but as a child I inferred that creative pursuits were a luxury, not a livelihood; a hobby, not a career. Toiling at a fabric store, though creatively fulfilling, was not viable. At a certain point, we must make compromises in order to live, and oftentimes the first to be cut from the cloth is our creativity.

When asked about the reading, male-writer-friend replies that the visiting author was “a babe.” When pressed for more information, male-writer-friend adds that what doesn’t get conveyed in the recording is the author’s bubbly personality, the way she smiles, says “yeah,” and plays with her hair. He makes little mention of the content of her talk, or the quality of her work, only that one answer to an audience member’s question was “interesting.” Nevermind that the author topped the New York Times best-seller list, and landed a two-book, seven-figure deal.

The temptation is there to divorce writing from publishing, to delineate and distinguish the two as separate. The VIDA Count exists because there is still a discrepancy. One could argue that it is harder for some—women, transgender individuals, people of color—to publish than others, and that this obstacle makes it harder to write. If no one is publishing your work, at a certain point, the writing—if its intention is to be read—feels futile. If no one is compensating you for your work, the writing—which needs little to be done—may be pushed aside in favor of more practical matters, like paying the rent.

In the essay “On Pandering,” published recently on the Tin House blog, Claire Vaye Watkins relays her experience of being dismissed by a male writer as not a writer, not even a human, treated instead as a piece of property. Dubbing an author “a babe” is a similar dismissal—the refusal to acknowledge her as a writer, instead a direct infantilization.

Claire Vaye Watkins continues: “I have not written anything of consequence since my daughter was born. […] I spend my days with a baby and that, patriarchy says, is not the stuff of art. Once again I am a girl and not a writer. No one said this. No one has to. I am saying it to myself. That’s the terrible efficiency of gaslighting.”

When the author bemoans to a friend that she has “nothing to write about,” the friend reminds her of motherhood, a newborn child, the “struggle to make your marriage work.” Vaye Watkins writes, “when I write some version of this down it seems quaint or worse. I thought I had enough material for a novel but when it came out it was a short story, and one that felt unserious. I tried a story in the form of a postpartum-depression questionnaire and it felt quaint. Domestic. For women.”

When I introduce one of my favorite authors to people who have not heard of her, I mention that she was once married to a male novelist, as if the mention of his name validates her own genius, a kind of genius by association. Her work is brilliant. Staggering. It does not need to be associated with anyone or anything, no man nor marriage, and yet I find myself engaging in the same sort of gaslighting mentioned in “On Pandering,” unintentionally diminishing this woman’s work—and my own in the process. In order to be taken seriously as a writer, I buy into the (false) notion that I have to write serious things.

Again: No one said this. No one has to. I am saying it to myself. That’s the terrible efficiency of gaslighting.

Like my mother, I am afforded the luxury of time for creative pursuits through the support of a spouse. Writing should be easy, and is made easier, because I do not have to choose between creative pursuit and material comfort. But what if this connection is severed, along with this illusion of permanence and security?

As I feed fabric under the needle, hyper-aware of the limitations of my skills and the re-emergence of some dormant knowledge, I feel quaint—strung between wanting to create garments and quilts with fabric, and feeling hemmed in by the inherent femininity of the pursuit. It feels trivial to even speak of it; when I explain my new pursuit to a male-photographer-friend, before he jets off on an assignment to South Sudan, I find myself trying to justify it with facts and figures gleaned from a documentary—placing my creativity in a larger context, assigning it more importance than necessary. Really, all I need to say is, I like to sew. Yet beneath that, Vaye Watkins’s words echo in my mind: Domestic. For Women.

In this way, writing is easy. But it is still an internal struggle to carve out time each day to devote to the craft, to actively ignore or refute the terrible efficiency of gaslighting. It is a struggle to honor stories and experiences often dubbed trivial, quaint, and to consider them valid enough to voice—stories about struggling newlyweds, divorce, a novice seamstress, a woman trying to marry creative fulfillment and fair compensation. It is a struggle to do justice to someone’s life and work, to not reduce them to simplistic narratives: mother, quilter, divorcee, newlywed, nurse, daughter, sister, woman. It is a struggle to remain open, to be fully human, and to render others as such in prose—but you must remember, must believe, that it will be so worthwhile.

e.v. de cleyre is a semi-nomadic writer, currently residing in the Pacific Northwest. She holds an MFA in nonfiction from New Hampshire Institute of Art, and her essays and reviews have appeared in Ploughshares online, The Review Review, and ayris.

§ 14 Responses to On “the Terrible Efficiency of Gaslighting”

You are currently reading On “the Terrible Efficiency of Gaslighting” at BREVITY's Nonfiction Blog.