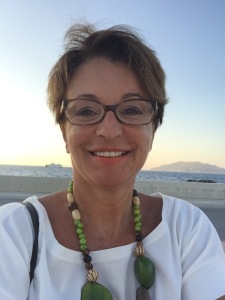 It started with the discovery of a sock.

I found it in the garage, tucked behind a box of empty Pellegrino bottles I’d been meaning to recycle and several books that were overdue at the library.  Just one baby sock, its partner lost, this teeny thing no longer than the length of my index finger, no wider than my palm.  Pale blue, with a bright goldfish embroidered on the heel.

This damn sock socked me in my heart.

It was a fragile time, every morning as delicate as glass.  My daughter Isabella had just left for college.  Life had taken on an unfamiliar routine in her absence, meaning there was no routine at all.  With her arrival in the world, I had given up my career and had essentially taken on one role: that of a mother.  With her departure, I was jobless and irrelevant.  Adrift.

Hour after hour of unstructured time awaited me when I woke up.  Rising from bed seemed pointless.  Getting dressed felt futile.  I was no longer needed in the demanding way I had known for over eighteen years.

I floated through the house, shuffling through the rooms with the hope of hearing Isabella call out my name, asking what was for dinner or where her cleats might be. Hearing nothing, I lumbered to the next and searched for her in an oblique way as I cleaned and organized my way through loneliness and angst.

The pale blue sock I found in one of my cleaning frenzies did not belong to my daughter.  It belonged to the ghost of my son, whom I had lost in childbirth.  I had known him for less than a handful of minutes, when the nurses finally obliged and allowed me to hold him.  I had named him Luca—which means Bringer of Light in Italian—when he was still in the womb.  He died on his way out.  His death brought a darkness so complete you could have pointed out a star in a clear night sky and I wouldn’t have seen a single thing.

Loss overwhelmed me as I stood there in the garage.  I had lost my son.  I had lost husbands, friends, lovers, car keys, investments, jobs, homes.  My daughter had grown and flown, and was lost to me in the way I had known for so long.  And somehow along the way, I had lost myself—the child I once was, and the woman I had known to be me.

Not knowing what to do, I drifted back into the house.  I opened my laptop.  I created a new document.  I started with the beginning, and wrote a single sentence: “My mother was the first woman in Florence to own a car.”

From that moment on, I began writing furiously.  I wrote as soon as I woke up in the morning, and just before bed.  I wrote during those long, unstructured hours in the middle of the day as my marriage ended and my dog passed away and my uncle committed suicide.  I kept notes on my phone, and a tape recorder in my car.  Sometimes I scribbled down no more than a sentence or two: An image of my grandmother Ida holding her hand-embroidered purse as she went out for the evening, a ribald joke my father once told, an insight I’d gleaned from watching a child mature and leave home, a snatch of a scene that detailed my mother, obliterated by addiction, in the final hours of her life.  I examined my life and the events that had shaped me from every angle—backwards, forward, sideways, and upside down.  Word by word, and brick by brick, I began understanding the foundation of myself—of where I had been, and where I would go—from previously unseen angles.  In the process, I learned to be mindful of details, blessings, discoveries.  And in the process, I felt the raw pain of loss loosening its grip on me.

“We exit ourselves to locate ourselves,” memoirist Beth Kephart remarked in her keynote address at the Bank Street Mini Conference.  “We journey beyond so that we might know the delirium and triumph and ache and wonder of return.”

I had exited myself—from knowing who I was, from knowing where I was headed—when I left my career, when I became a mother, and when I endured tremendous loss, but through writing, I was returning to someone I didn’t know existed.  And I was happy to meet her.

Lauretta Zucchetti, a former award-winning executive at Apple and Xerox, has a number of brag-worthy stamps on her passport and a set of drums in her office. Her work has been featured on Scary Mommy, The Shriver Report, Literary Mama, Tiny Buddha, Purpose Fairy, Blog Her, Lifehack, and in NOTHING BUT THE TRUTH SO HELP ME GOD: 73 Women on Life’s Transitions. An author, life coach, and motivational speaker, she splits her time between Italy and San Francisco. To learn more about her, visit www.laurettazucchetti.com.

§ 19 Responses to Writing Through Pain

You are currently reading Writing Through Pain at BREVITY's Nonfiction Blog.