A Review of Patrice Vecchione’s Step into Nature: Nurturing Imagination and Spirit in Everyday Life 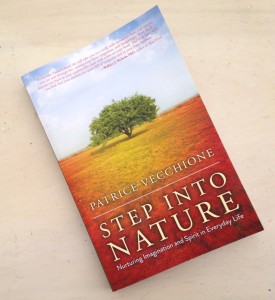 Patrice Vecchione has experience prompting writers, whether university students, community members, or elementary school students. Over the years, though, she has noticed a shifting relationship among them to the imagination. Individuals who used to respond to going outside to look at the clouds with descriptions of “elephants parading, a dragon biting its own tail, a tall man singing to a crowd” now look up and are quiet. When someone finally says, “Clouds, Miss Patrice. I see the clouds,” she questions whether the part of their brain that fancies and ideates is getting enough exercise.

I ordered her latest title, Step into Nature, after hearing her interview on radio station KKUP about conserving a wildlife habitat at Ford Ord National Monument. Having overlooked the book’s subtitle, Nurturing Imagination in Spirit in Everyday Life, I was surprised by its motivational tone. I was snowed in when it arrived; otherwise, I may not have let her offer encouragement I didn’t know I needed. A child of the Blue Ridge Mountains, I have long called on nature as a source of inspiration and strength, but of late diminishing species and weather extremes have worried my relationship to the outdoors. It was helpful, then, to find her descriptions of raptors and tumbleweed paired with sentiments like “art-making itself is a refusal to be plowed under by doubt.”

From the future of the Great Barrier Reef to the endangered Lignum vitae, or tree of life, Vecchione knows few are willing to protect species and habitats until they personally recognize their value. She touches briefly on her backstory in this volume, but nature helped her recover from a painful relationship with an alcoholic mother, which she elaborates in the poetry collection The Knot Untied (Palanquin Press, 2013).

Vecchione’s initial reluctance as a nature-goer, who began in her in her thirties to find woods and parks as invigorating as museums, fosters associations for others. She lays the groundwork for adult wonder when a flicker “with her loud, single-note kreer call” sounds like laughter above.  She bridges the intimacy of her solitary walks with passages from writers like Federico García Lorca, Gary Soto, and Anaïs Nin.

Although novice or out-of-practice nature-goers are the better audience, there are passages for experienced nature lovers too. Many times I have cupped my ears to distinguish the trill of wrens from warblers, but I had never discerned, as naturalist Paul McFarland has, the distinct notes that sound from the hemlocks or firs that house them. The “longer the needle, the lower pitch the song,” he says in a passage Vecchione cites about wind song. In another section, hail breaks so cleanly from its cloud it stings one side of the trail she is on while leaving the other side untouched, reminding those accustomed to venturing outside of the constant potential for surprise.

An advocate for the trails she walks, Vecchione values her privilege to live within ten minutes of a large protected open space. She wanders farther afield from Jacks Peak Park to prickly-pear cactus and redwood canyons, but this recreation area grounds her insights into the artistic process. The author of Writing and the Spiritual Life and two poetry books, she directs much of the book toward writers afflicted with self-doubt. “Art is optimistic,” Vecchione says. Encouraging others to listen to the quiet of those cochlea-like fiddleheads as well as the “silence before a thunderstorm,” she points out. “Not only can people be silenced by others; sadly, we can do it to ourselves as well.”

A force for greater self-acceptance, she calls attention to art that, like nature, incorporates imperfection. Japanese ceramicists, for example, mend broken pots with seams of gold in celebration of wabi sabi, or “a sensibility that an artist brings to her work that accepts loneliness and invisibility, as well as imperfection and transcendence, and allows them to manifest like shards of lightning.”

Peppered with writing prompts and questions, this book best leads readers to close it and head outside. To open it though is to awaken an urge. Whether one has grown, as she was in her twenties, “numb to the craving,” for a relationship with the earth, or if one has never wandered it, as Henry David Thoreau prized, Vecchione calls readers to tend this crucial freedom to the creative process while spaces remain preserved for it.

Amy Wright is the author of Everything in the Universe and Cracker Sonnets, both forthcoming in 2016. She is also the nonfiction editor of Zone 3 Press, coordinator of creative writing and associate professor at Austin Peay State University, and author of four poetry chapbooks. Her first prose chapbook, Wherever the Land Is, is scheduled for release this spring.

§ 2 Responses to A Review of Patrice Vecchione’s Step into Nature: Nurturing Imagination and Spirit in Everyday Life

You are currently reading A Review of Patrice Vecchione’s Step into Nature: Nurturing Imagination and Spirit in Everyday Life at BREVITY's Nonfiction Blog.