Get Back In The Kitchen 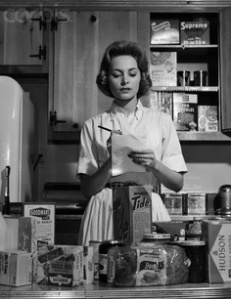 When I was a theatre director, students and actors asked me all the time, “how did you get to be a director?”

They always looked a little disappointed by my answer: “I printed up business cards and started introducing myself to people as a director.”

I’d elaborate for people who stuck around. “I directed high school productions as a guest artist for very little money, and taught at high school conventions. Then I taught workshops at colleges, for a little more money, and then I started getting hired at colleges to direct. From there I got professional gigs.”

Looking back, it’s a little glib. I skim over the hundreds of no’s. I don’t mention sleeping in my truck, or coasting on my then-husband’s credentials until we built our reputation as a team. But it’s also true. I showed up and insisted I was qualified–or at least, that I’d do something new and interesting and hey, it’s cheap enough that if it’s a failure, no biggie, right?

A lot of my writing success–such as it is–comes from showing up. Thinking, “Sure, I’ll drive three hours to Chicago to hope my name gets picked out of a hat for The Moth storytelling show.” And when it did, being ready with a winning story. Thinking, “Why shouldn’t I speak at a conference?” and having a wonderful experience both teaching and learning at Hippocamp. I’ve absolutely had big, embarrassing failures, too–when I misjudged my abilities, or got over-extended (like being absent from this blog for four months). But the important part, every time, was showing up. Acting like I had a right to be where I was–even when I didn’t feel it.

Sculptor Joshua Diedrich thinks of this as “going into the kitchen.”

…most people who want to start a business, or make a living as an artist…aren’t so much working toward that goal, as they’re waiting for permission to receive it. If the world is a restaurant, they’re sitting at the buffet, eagerly watching as new dishes are brought out, hoping the next one will be their novel, or their one-woman show, or their cafe… They’re waiting to be found.

And they never will be.

They never will be because the mystery of creation doesn’t happen in the dining room. They will never be given permission there, or discovered, or recognized…There’s no point waiting for magic in the dining room. All the real magic happens in the kitchen.

Most of us spend our lives either assuming we can’t touch the kitchen door, and never even thinking to go near it…Very few of us ever have the guts to just kick down the door. Usually, only the very entitled, or the very desperate even think to do it.

Diedrich writes about his going-into-the-kitchen moment, and why it’s important to know you can, too. Read the whole post (with a nod to Maurice Sendak) here.

§ 5 Responses to Get Back In The Kitchen

You are currently reading Get Back In The Kitchen at BREVITY's Nonfiction Blog.