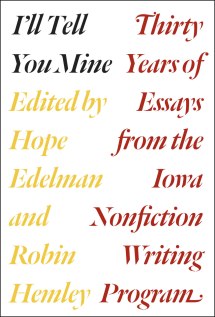 In part two of this two-part blog post on teaching creative nonfiction using newly released essay anthologies, Debbie Hagan discusses I’ll Tell You Mine: Thirty Years of Essays from the Iowa Nonfiction Writing Program (University of Chicago Press, 2016) and how it motivated her to create a show-and-tell lesson on revision and encourage students to think of writing as art.

Last semester I tried something new and a bit risky with my students. Actually it was an old idea, but I’d never summoned up the courage to actually try it. Then I read a new creative nonfiction anthology, I’ll Tell You Mine: Thirty Years of Essays from the Iowa Nonfiction Writing Program. In a roundabout way, this book supported ideas I’d wrestled with for years about revising and rewriting. Even more it pushed me to actually try this idea.

For eight years, I’ve been teaching basic writing to budding artists at a small art school in New Hampshire. Because they are reluctant writers, I tailored my classes around their interests. We read about art, looked at art, used art as writing prompts, and compared art making to writing. While they enjoyed free writing exercises, they hated rewriting. They considered it a waste of time.

My aha moment came while reading I’ll Tell You Mine. I figured this would be just “the best of” NWP essays, but it was far better. Hope Edelman and Robin Hemley curated this volume of innovative writing by tracking down eighteen essays that began at NWP, but were reworked and rewritten years later. Most helpful to me were the writers’ candid “after” comments. They traced the essay’s many steps, from the initial idea, to technique decisions (form, voice, tone, and point of view), to feedback, and then, ultimately, to revision. I found the writers’ comments insightful, because as thrilling as writing can be, truth is, it can also be a slog.

“One Blue Note,” by Marilyn Abildskov, is sort of a love letter to a Japanese salaryman who discovers the meaning of life by opening his own jazz club. The writer reveals that the early drafts left her discouraged. “I was trying to write about the place in a journalistic way, rather than the way I experienced it: impressionistically,” she says.  Around this same time, she discovered a new fact: jazz is built around three notes. These two new thoughts helped her re-envision the essay: how to start, what to say, and where to focus. All this reworking resulted in a hypnotic essay built around the evocative nuances of jazz and language. About the process, Abildskov concludes, “Timing is everything, isn’t it? And readiness.” 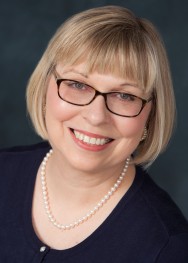 Readiness…yes! Essays must be unraveled. It can take a week, a month, a year, or six years in the case of Michelle Morano, who wrote “Grammar Lessons: The Subjunctive Mood.” Her essay began in a bar discussing difficulties she’d had with the French subjective tense. The first draft came in a rush. Phillip Lopate read it, liked it, but admitted it didn’t hold up well in “re-reading.” The reader didn’t gain anything new the second time around, he said, and pushed Morano to dig deeper, build stronger resonances, create more meaning. After six years, she did it. Her essay appeared in the Best American Essays 2006.

It’s a slightly different story with Ryan Van Meter, who says, “I know I want to write an essay when I find a contradiction within myself, usually within a personal experience I want to figure out—an event with a beginning, middle, and an end.” In “Things I Will Want to Tell You on Our First Date But Won’t,” he struggled with form.  Van Meter wanted to write about the contradiction between his desire to date (being single after eight years), but not wanting to spend the first date reliving the past.

Van Meter tried various forms—first a monologue, then an open letter. Susan Lohafer, NWP workshop leader, suggested that if he wanted to borrow a form, he should use it “to its fullest potential.” That’s when he settled upon a list.

By the time I’d finished this book, I couldn’t wait to dig out my languishing essays. Also, I imagined tooling these ideas into a lesson about revising/rewriting. That’s when I decided to try this idea I’d been mulling over. I would share with students a first draft of one of my essays.

Immediately a legion of demons descended upon me. I never show first drafts to anyone. I’d just as soon parade in front of my class in my underwear than show my unfinished work. My students are killer critics: There’s nothing special about John Updike; Annie Dillard is such a bore; Susan Sontag does nothing but talk in circles. I could hear what they’d say about me: She’s not much of a writer if she has to rewrite this seven or eight times.

This is what had stopped me from doing this exercise before. This time, I pressed on. I knew writers far better than I had rewritten the same essay—sometimes for years. I realized, there’s no shame in digging deeper, adding new thoughts, revising ideas until they’d reached their full potential.

In class, I passed around both the first and finished drafts of my essay, while my heart pounded wildly in my chest. One of my students read the first draft and stumbled over some of the rougher spots. I pointed this out: “When you read your work aloud, you can hear the spots that need more polish.”

I read the final draft. For the first time all semester, no one talked or sneezed or played with their cell phones. All eyes were on me. When I finished, there was long, gaping silence, which sort of scared me. I waited for one of them to make the first move. The girl who had read the first essay spoke slowly: “It’s as if each word was chosen for a purpose.” Yes!

Another student added, “This is way beyond anything most of us were taught in high school.” Yes! We’re creating art.

Artist John Berger, in his 1953 essay, “Drawing Is Discovery,” described art making in this way:

For the artist, drawing is discovery. And that is not just a slick phrase, it is quite literary true. It is the act of drawing that forces the artist to look at the object in front of him, to dissect it with his mind’s eye and put it together again; or, if he’s drawing from memory, that forces him to dredge his own mind, to discover the content of his own store of past observations.

Substitute writing for drawing. The writer must look, think, draw connections, and go back over the work again and again. That’s how we discover what’s true. That’s how we understand what it means to live and survive on this crazy planet. This is exactly what I wanted students to understand.

Right now I’m in the throes of working on my fall syllabus. This year I’ll be teaching a similar class, Thinking, Making, Writing, also aimed at art students, but this time at Boston’s Massachusetts College of Art and Design. I’m going to try the same exercise this semester, but I’ll ask students to bring in their sketchbooks. Together we’ll share what it means to create art.

Debbie Hagan is book reviews editor for Brevity and former editor-in-chief of Art New England. Her work has appeared in Hyperallergic, Brain, Child, Boston Globe, Dime Story, and elsewhere. She looks forward to teaching this fall at Massachusetts College of Art and Design.

You are currently reading Today’s Lesson: Writing Is Art at BREVITY's Nonfiction Blog.