One of the great privileges and joys of going back to school for an MFA was the unexpected bonus of entering into an entirely new community of people whom I never would have met otherwise, men and women who love to do the same thing I love to do all day, which is to read and write. I had been a newspaper columnist for years, but most of my work has been done in solitude, as much of a writer’s work is done. So the very idea of belonging to this community of writers, this group of strangers, was a bit unnerving at first. Would I be the oldest student? Would my work measure up? Would I embarrass myself on Dance Party Night?

Now a few years after our graduation my twenty fellow matriculating classmates are not only bound together for life by the fact that we shared something that demanded much from us financially and in time spent away from families and jobs –  we are also bound together by a communal spirit. This spirit is perhaps best exemplified by an incident that occurred during our second residency.

During our residencies, besides the ubiquitous and dreaded workshops, students were treated to readings and lectures by both permanent faculty and visiting writers. A mainstay of MFA programs, these events are hugely popular among the students. Maybe for each of us, in our secret heart, we are imagining our own selves up there someday. 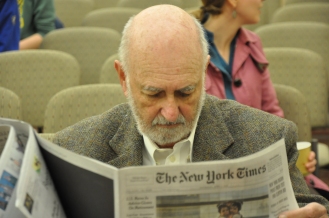 On this particular day, a lecture was being presented by David Shields, whose book Reality Hunger: A Manifesto was due to be published in several months.  The buzz among the students was that this lecture was not to be missed.  I am not sure how “the buzz” works, but among writers it usually seems to denote some sort of controversy, which at that point in our residency, we are dying for.

It was a packed house as Mr. Shields began his lecture.  Just the word Manifesto seemed to signify something promising; something sure to provoke discussion over glasses of red wine in our dorm rooms later that night.  We leaned forward as one, pens and notebooks at the ready, nifty note-takers that we are.

Mr. Shields started out riffing on a few notions he had about nonfiction versus fiction, and then about five minutes in, realized he had somehow gone off track from his planned lecture. He began sorting through his notes to find his place, but the papers must have gotten all mixed up, because he kept shuffling them faster and faster. The sound of this panicky paper-shuffling stabbed the deep quiet of the lecture hall for several interminable minutes.

He must have realized at some point that he was wide awake and not dreaming this particular nightmare. At that moment, perspiration began streaming off the top of his head in rivulets. Mr. Shields is completely bald, and the harsh overhead lighting did not help the situation. As the silence lengthened, we in the audience leaned forward as one.  We squirmed in our seats. We stared at one another in wide-eyed empathy. We willed him silently to find his place. We have had a similar nightmare.

In the hot, glaring spotlight over the lectern, the stream that poured from his head dripped piteously on his notes, which by now seemed to be hopelessly scrambled. Mr. Shields did not make eye contact. He used the back of his arm to try and staunch the perspiration, but this only served to fling it off him and make room for more. Thus passed several more minutes of dead silence, except for the slap of brow-wiping and the crackle of uncooperative paper.

Then, from the front row, another bald pate rose up and we all breathed out (we had been holding our collective breath). Bennington instructor and essayist Phillip Lopate was holding something out to Mr. Shields – an offering, a white flag. A cloth handkerchief.  Phillip Lopate was one of the reasons I had applied to Bennington, and here he was, saving a fellow writer in true distress. Here was a man who could be counted on.  Here was a man, maybe the only man in the room, who had a cloth handkerchief. It turned out to be exactly what was needed. After Mr. Shields was able to blot himself dry, his anxiety subsided, and he was able to get his notes in order. He went on to deliver his lecture like nothing out of the ordinary had happened.

I like to think of my new community of fellow writers in just this way. I start to panic, and think I am not good enough, or my pages or words won’t order themselves the way I need them to, and I think of Phillip Lopate’s handkerchief.  It is a trim white flag, folded away, but at the ready when I need it.

Kathy Stevenson‘s essays have appeared in a wide variety of magazines, newspapers, and online publications including The New York Times, Newsweek, The Writer, Philadelphia Inquirer, Chicago Tribune, Tishman Review, and (recently) the Brevity Nonfiction blog.  She has had short stories published in Clapboard House, Red Rock Review, South Boston Literary Gazette, and Pioneer Press, and has an MFA from Bennington College.