A Poem, A Keyhole 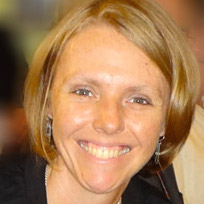 I’m a prose writer. I’ve been trying to write a story that explores a friendship breakup from 20 years ago, when I was a student at a tiny college in southeast Michigan and quietly questioning my sexuality. It is one of those stories where the narrator can only guess what went wrong.

I’ve spent an embarrassing number of hours, days, months, and years trying to capture the emotion of that loss in my young life, and I have been ungracefully flailing.

My workshop group members told me they got lost/bored with the logistics of college life. They said the characterizations felt flat. It needed a more compelling narrative arc. The emotion I intended to communicate through scene and detail left them wanting.

I revised again—moved the ending to the beginning, cut long sections of dialogue, tried to bring the characters to life with gesture and action. I read volumes of CNF essays for ideas on how to improve the story. Despite my desire and relentless effort, a second-round of workshop revealed that I still hadn’t solved the story’s problems. I set it aside, hoping an epiphany would surface while I drove or showered, or even while I slept.

A few weeks later, I signed up for an eight-week poetry workshop at Denver’s literary hub, Lighthouse Writers Workshop. I was desperate for a change of pace from my long-form essays and thought poetry would offer a good mental shake-up.

During the first week, the workshop’s instructor, Andrea Rexilius prompted us to write a poetic response to a favorite poem and to focus on what Ezra Pound called “Melopoeia” or the “musical property” of language—the way sound collaborates with meaning.

I selected Ocean Vuong’s, “On Earth We’re Briefly Gorgeous” from his 2016 collection, Night Sky with Exit Wounds (Copper Canyon Press). I wrote the beginning of a one-page poem, borrowing Vuong’s theme of impermanence.

I quickly became enthralled by the microscopic act of tinkering with language and experimenting with form. I liked the tidiness of a one-page composition surrounded by oceans of white space. It was like my eye was at a keyhole and could see an entire emotional landscape in a small, visible frame—such a stark contrast to my 17-page prose maze.

As a poetry beginner, I felt no pressure for my poems to be perfect, publishable, or even complete. It made me remember poet Brenda Shaughnessy’s 2016 interview with Chris Soto in LAMBDA Literary. Shaughnessy, a non-singer, started taking singing lessons. The act of doing something she wasn’t good at made her stop “wallowing in bullshit.” She said, “Really it’s neither difficult nor devastating to hit a wrong note or to write a bad line of poetry. Just write another. Sing another song. Big whoop.”

Writing poetry has been a welcome disruption; I’ve noticed a shift in myself, a loosening up in my creative process. I am having fun and not taking myself too seriously. I feel a freedom with poetry that I couldn’t quite articulate until a student in the workshop asked our instructor why she has pursued poetry over other forms of writing. Rexilius said:

I tend to remember my experiences on a more emotional, internal level (how something felt in terms of tone, or atmosphere, or mood–metaphorically), rather than remembering an experience in terms of its specific external details–literally, such as what a room looked like or whether or not my mother baked cakes. This interiority of memory, free of timeline, free of character (in a way), and of plot, is what I think makes me a poet.

Rexilius’s casual comment has stayed with me ever since. With my own story, I wanted to explore the intimacy of female friendships and the fuzzy boundaries between filial and romantic love. All along, I had been trying to prove to the reader, and maybe even myself, that the relationship embodied characteristics of both.

Through poetry, however, I breathed into the freedom from literality. I entered a writing space where I felt empowered to confidently define my own emotional experience through a collisions of disparate images, both literal and imagined without the same level of self-consciousness. In my poems, it didn’t matter who initiated our first hangout or what kind of cereal my friend ate for breakfast at the dining hall. It didn’t matter how our relationship progressed from A to B. Poetry freed me from the constraints of my memory and a clear narrative arc. I could, instead, distill the emotion of our relationship and its end by using any available means. The poems I wrote felt true, honest, raw—exhilarating.

When I first started this poetry workshop in August, I expected that the deep study of language would translate across genres. I saw poetry as a tool to help me improve as a prose writer and positively disrupt my writing process. The workshop has exceeded all of these expectations.

Nicole Piasecki teaches writing and rhetoric at the University of Colorado Denver. She identifies mostly as a creative nonfiction writer but is intrigued by the possibilities of poetry. Her creative works have been featured in Hippocampus Magazine, Motherwell, Word Riot, Gertrude Press and other literary and professional journals. Nicole tweets about teaching, writing, and parenting @npiasecki.

You are currently reading A Poem, A Keyhole at BREVITY's Nonfiction Blog.