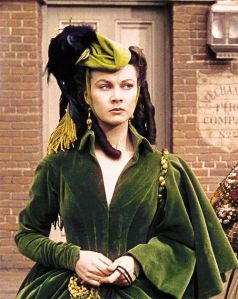 This world situation is really interfering with her personal journey

(In which Katniss, Shrek and Scarlett O’Hara teach us about using larger social issues in memoir.)

Writer Stephanie Andersen and I were emailing about structure in memoir. We’d looked at the idea of ‘stasis’—that almost all books begin with an intolerable existing situation, something the protagonist must fight against and change.

We already know the answer, right?

It’s when it gets personal. When the bad world-situation personally affects the protagonist, giving them a strong motivation to act.

In a weird way, Scarlett survives the Civil War because she can’t let go of her hope to get with Ashley. Every decision she makes is based on the answer to “Will this get me closer to Ashley?” Many of the events of Gone With the Wind* happen in Atlanta because it’s a place where the war was especially bad, but the events are happening to and around Scarlett because she moved there to be closer (by proxy) to Ashley.

Scarlett’s intolerable situation isn’t “There’s a big war changing my life.” It’s “The one man I really want doesn’t want me.” Ashley’s wife Melanie, the war, and Scarlett’s own stubbornness are all obstacles of about equal weight—i.e., escaping the burning of Atlanta stops her from getting to Ashley, but so does Melanie being super nice and sweet in a way that keeps unintentionally thwarting Scarlett.

The war triggers the plot, because that’s when and why Ashley chooses Melanie, but it’s not what Scarlett is fighting against.

I haven’t read All The Light We Cannot See, but as an editor, I’d go with the personal. Let’s take a big literary sidestep to The Hunger Games. “This is a world that kills children on TV” is a horrible stasis for the country. But what makes the book Katniss’ story—what interrupts the stasis—is “This is a world that picks my sister to be killed on TV.” If anyone else’s name came out of the bowl, Katniss would feel bad and the story would be over at the end of Chapter One.

If your memoir or essay deals with a larger issue—recovery, a tragic accident, poverty —look for the key moment where the badness of the world intersects directly with the protagonist’s life. Watch for the big-picture place where the hero’s personal breaking point leads them to take an action toward a personal goal that also leads to changing the intolerable larger-world situation around them. In memoir, this is often a change in the protagonist’s relationship to the world, rather than changing the world itself. For example, an alcoholic’s recovery narrative isn’t going to end in a world without alcohol—but the protagonist has changed their own relationship to the world, so their worldview now shows other options/other modes of living. They have changed the world as they see it, and they’ve broken the stasis that gave them an intolerable situation at the beginning of the book.

Stephanie got specific (and gave me her permission to write this post):

Gentle Blog Reader, can you hear it? Stephanie already knows the answer. It’s right there in the question.

My memoir…where I long for my mother’s truth, her story, and to understand her silence.

And the larger context is there, of course—we can’t have the Hunger Games without the Games—but her memoir is about the intersection where her life is directly affected by the way rape silence exists in the larger world. The bad stasis is not that all women are silent—it’s that she discovered silence in her mother. It’s personal.

If you’re writing memoir against the background of a larger issue, definitely set up that larger situational stasis. It’s world-building—another useful concept from fiction—but for nonfiction. But your story isn’t the story of the world. It’s the story of how that situation personally made your life intolerable, and how you fought for change.

If you’re wondering how to find that intersection, read your query, or your pitch, or a paragraph summarizing your idea. What’s the stasis of the world? How does that directly affect the narrator? Chances are good the answer is right there on the page. Inside the big picture is the key moment where the issue intersects your life and starts your journey. It may take some time and thought, but listen to yourself.

*(BTW blog readers, GWTW makes a good example but is (as you also already know) hugely problematic. There’s a great essay at Slate about how modern cinemas are handling the legendary-movie-vs-huge-racism issue).

Allison K Williams is Brevity’s Social Media Editor and hosts the Brevity Podcast. Sign up to receive her writing&travel newsletter at TinyLetter.

§ 8 Responses to You Already Know

You are currently reading You Already Know at BREVITY's Nonfiction Blog.