A Review of John Hodgman’s Vacationland 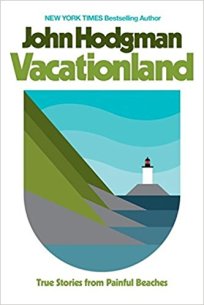 At some point as I was dancing to 50 Cent on top of a red vinyl booth at Angel’s Rock Bar, Thursday night slid into Friday morning, and someone shouted “Happy birthday, Kevin! How’s it feel to be twenty-five?”

“Shit,” I thought. “Twenty-five.” It’d never crossed my mind. By that age Mary Shelley had written her magnum opus, Rimbaud had retired, and Keats was dead. A quarter of a century, and what did I have to show for it? I looked over at my friends: two soon-to-be lawyers and a candle-making entrepreneur (the youngest millionaire in Kansas City) who was receiving a complimentary lap dance from an off-duty stripper.

And then there was me—a would-be writer with pitifully disconnected facial hair, slowly squandering the privilege afforded by his white, middle-class upbringing. For some reason, a bidding war had not yet erupted between the major publishing houses desperate to acquire my essays on nature and travel and girls and stuff. The successes achieved by historical geniuses (is it too much to ask?) had heretofore eluded me.

In that moment, as my friend and the stripper laughed simultaneously at the discovery that they were both gay, I realized that the stories I’d been telling myself were delusions.

In his memoir Vacationland: True Stories from Painful Beaches, John Hodgman finds himself in a similar situation—albeit with double the years, privilege, and facial hair. After his first two New York Times–bestselling humor books, a correspondent gig at The Daily Show, and his PC personification in Apple’s “Get a Mac” ads, something shifted for Hodgman:

. . . I had just realized that I was not going to live forever. The thought had never occurred to me before. I am a straight white man, the hero of almost every story I had ever encountered. What’s more, I am an only child. The idea that the world could continue without me was not only unimaginable, it was insulting.

So began Hodgman’s middle-aged turmoil, which Vacationland explores through his two homes away from home: the rural western Massachusetts of his youth and the jagged Maine coast of his adulthood. In creating a portrait of both locales—the landscape and its people, the charms and contradictions—Hodgman also depicts a precocious boy turned rule-loving, self-doubting C-list celebrity.

Vacationland is funny—not “stock praise in a book review” funny, but “people in Starbucks asking what you keep laughing about” funny. Although no longer cataloging satirical facts, Hodgman retains the wit and eccentricity of his previous books while covering topics such as the pranks of George R. R. Martin, accidental boat purchases, and the nefarious dealings of small New England mammals. “Raccoons” he claims, “are beyond fear, and they are assholes. I tried to chase a raccoon off our porch as it was casually emptying our bird feeder into its fat mouth. As I yelled, it turned its head and eyed me with such casual contempt that I apologized to it.”

The description of nerdy foibles and adulthood misadventures is reason enough to read Vacationland, but as the book progresses, humor yields to consideration of deeper issues. Hodgman is acutely aware of his privileges (skin, wealth, opportunity), and searches for the proper response to them. These reflections are timely. America has seen all too clearly the backlash from an inability of white men to accept the slightest challenge to—or even the acknowledgment of—their cultural centrality and privilege. “Whiteness,” Hodgman writes of the responses to police shootings and Black Lives Matter, “was going through a desperate midlife crisis.” But he spares us the self-flagellation, acknowledging that those with privilege can’t change who they are. But they can be aware of the world around them, contribute without fanfare, listen when others speak, and get out of the way when their work is done. “All places and experience,” he concludes, “deserve writing about.”

Between inventories of all of the reasons Maine is a terrible place to vacation, and amid scathing indictments of fudge and fresh-water lakes, the stories of Vacationland smuggle in questions of mortality, loss, and identity. Hodgman’s self-interrogation is at the very center, providing an example to all readers. “There are times,” he writes, “when all the lies you have told about yourself to yourself just fall away.”

That night, as the beginning of my life came to a swift and unceremonious close, I stopped telling myself that I was unprecedented, inherently interesting, and destined for success. There were younger, more talented, more dedicated writers out there, and I needed to get to work.
__
Kevin Kotur is an MFA candidate and Durwood fellow at the University of Missouri-Kansas City. His nonfiction can be found in The Kansas City Star, Number One, and Chariton Review.

§ 3 Responses to A Review of John Hodgman’s Vacationland

You are currently reading A Review of John Hodgman’s Vacationland at BREVITY's Nonfiction Blog.