Throw It Away! A Writer’s Guide To Decluttering 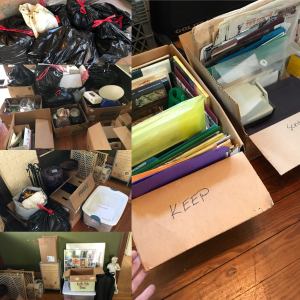 We’ve all been there.

Friend of Friend: What do you do?

Friend of Friend: Hey, I have a great idea for a book! Why don’t you write it and when it gets published we split the money?

Ideas are the easy part. Sure, “high-concept” pitching is a thing—It’s Speed, but on a boat! It’s the Wizard of Oz, but in space!—but it’s a thing for writers with a few airport-ready books under their belt and a relationship with a major publisher. Everyone else has to actually, y’know, WRITE THE BOOK.

Ideas ignite passion and inspiration. But getting 60,000+ words on the page takes time and craft. That guy at the party doesn’t understand that most writers have plenty of unwritten ideas scribbled on scraps of paper and dictated into our phones at 3AM, sparked by articles we’ve read, lectures we’ve heard, people we’ve met. We are drowning in ideas.

Most of our ideas will never take flight enough to spend years of our lives writing them down. We stockpile them, stacking up paper and browser links against the day we’ll be out of ideas. The pile itself becomes an obligation, a list of ignored tasks weighing on us.

Sometimes the space for what you want is filled with what you’ve settled for. Full closets have no room for new clothes. Stuffed files shut out new ideas. (This also—sacrilege!—applies to bookshelves.)

I spent two days emptying basement boxes from a house I no longer live in. It was mostly stuff I hadn’t used in five years, stuff I’d never even unpacked after moving to that house in 2003. I thought files would be the hardest part. Banker boxes and milk crates full of past teaching syllabi and class assignments and yes, idea after idea. Folders marked Plays to Write, Articles to Read, Possible Blog Posts. But about six folders into the first box, I noticed, These ideas aren’t that good. Or they didn’t resonate with me enough to be worth my time. Or they’re something I think about a lot and don’t need twenty pieces of paper to remind me.

I started with 30 storage boxes, 7 of them documents and files. I started with fear. What if I couldn’t get rid of any of it? Was I a failure if I threw away an idea I’d never tackled? What if I got sad, or angry at my past self? What if something I really valued had been destroyed by that water leak three years ago? After two days and the (paid) help of a friend, I’m still not done with the basement, but the dread is gone. So is most of the stuff. Seven boxes and 6 garbage bags to charity; 3 boxes and 2 bags to the community theatre; 6 bags of documents to the shredder; 6 bags of trash to the curb; a stack of empty boxes.

I’m keeping one box. One. Plus half a box of “letters and photos I don’t want to go through right this minute.”

In my one box, I have two files of ideas to be written. They aren’t fat files. They, plus my notebook, plus my brain that still works, are plenty of ideas for the rest of my writing life.

Ideas aren’t precious and they aren’t hard. Execution is hard, and keeping a paper fort of ideas doesn’t do anything for our work ethic.

Contemplating your own files with terror? Here’s how to get started:

Don’t sort in the storage space. Take everything into a clean room where it must earn its place.

Keeping paper doesn’t lead to more/better writing. Trust that your brain is a pipeline. Flush out the reservoir and make space for new ideas.

§ 25 Responses to Throw It Away! A Writer’s Guide To Decluttering

You are currently reading Throw It Away! A Writer’s Guide To Decluttering at BREVITY's Nonfiction Blog.