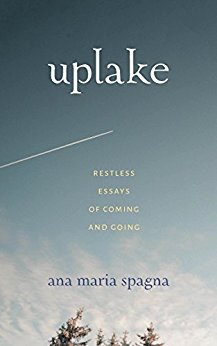 In my twenties, I spent summers in a Thoreau-like lakeside cabin in the woods, not far from Walden Pond. Even now, when it rains here in Los Angeles, and especially at night, even happily married as I am, I imagine I’m there in my cabin bed listening to the patter-ping of raindrops on Long Pond. I’d fall asleep to that music, or to the pulse of crickets and critters scampering along the mulchy path, and wake in the strange quiet before sunrise to mix bread dough for the retreaters who stayed in their own cabins down other paths. One summer there on the pond, a city friend accused me of having fallen in love. I had: with the pine-needled forest, the moonlight that draped like fabric to the sandy pond floor, the sunrise through the kitchen windows, the rain, and my cabin. Even so, every winter I returned to the city. And one summer, regretfully, inevitably, like Wendy grown up, I stopped returning to the woods.

Ana Maria Spagna immigrated in the opposite direction, from the urban sprawl of her southern California childhood to the Pacific Northwest woods. Her descriptions of her adopted home in Stehekin conjure feelings of sparseness, far-off neighbors, evergreen-scented air, crackling autumn leaves, whispers of snow. Though Long Pond is on the other coast and I’ve never been to Washington, Spagna’s accounts of Stehekin in her newest book, Uplake: Restless Essays of Coming and Going, echo of my old home, the one I pine for when it rains or in the noise of daily living.

However, if my memory of Long Pond has blurred into a sepia-toned former romance, Spagna knows her Stehekin like a time-tested marriage. Under her frank pen, the paradisaical forest is denied neither its beauty nor the choke-hold of fire season, racket of chainsaws, and slide of valley walls that are washing away in changing-climate floods. She fell in love with a place that is “pristine, spectacular, majestic, maybe even sublime,” but tied the knot with all its off-the-beaten-path pleasures and pains.

Thinking of my own cabin in the woods, I wonder if it was fear of my ability to sustain fascination with quietude that drove me back to the city. From the porch of her Stehekin home, Spagna, too, hankers for faster internet, multiculturalism, book readings, concerts, subways, restaurants, and museums. Winnowed with levelheaded contemplations, in “Where You’d Rather Be” and “Slow Connection,” Spagna examines the timeless tension between wonder and stasis. “‘You’re so lucky to live there’ people say,” and though she agrees, she ponders how, or when, to engage or assuage her desires for novelty in the stillness of a quiet place.

Spagna drops a plumb line deep into questions about what comprises the sinews of commitment. Perhaps Stehekin, where Spagna moved years ago with her wife, Laurie, is a stand-in for her monogamous, longtime commitment to a romantic partnership. She muses that marriage “is a word without movement…. [it is not] a relationship or friendship, with a ‘ship’ on the end ready to set sail.” And yet, she knows that marriage and Stehekin belong, like her, to the temporal world: they are mutable. And that, too, must be untangled.

Uplake’s self-probing questions are woven through a broad array of subjects—civil rights, mortality, elk steaks, wildfires, Cheryl Strayed, fear of flying, John Denver, bears. In “Post-Strayed,” Pacific Crest Trail hikers gather malodorously at the local post office for their replenishment boxes, ignorant in their steadfast forward movement to that essential passion of Spagna’s: the particularities of place. “I used to find this troubling,” she writes, “the way people waltz into the woods and act as though they’re right at home in a place they’ve never been….” She worked for years maintaining area trails and is attuned to Stehekin on an almost cellular level. This is how, perhaps, she answers her own questions of commitment and wonder:

[the through-hikers] know nothing of the hardships—the endless drizzle in spring or the inversion in winter or the wildfire smoke in summer—or the tiny miracles either—the first wild currant blooming pink, the shimmer of moonlight on hoarfrost, the cold sweat elation of bucking the last log off the trail and watching it somersault down to the creek.

That sentence could easily turn into a meditation on marriage: What hardships do passersby know nothing of? What tiny miracles? For the lyricism, self-inquiry, and nature setting, Uplake: Restless Essays of Coming and Going sits on my shelf beside Annie Dillard, Kathleen Dean Moore, and Mary Oliver. It seems more than appropriate that Stehekin, whose name means “the way through,” is where Spagna would hang her hat. Like her stories of swimming, hiking, flying, running, and driving, this collection is a moving—in more than one sense of the word—meditation. It her exploration, and ours, of how to find the way through. On how, in the long days but short years of living, to have a life of wonder.

__
Arielle Silver daylights in the music industry and twilights as adjunct faculty at Antioch University Los Angeles, where she earned her MFA and served as editor-in-chief of Lunch Ticket. Her work has appeared in Literary Hub, Jet Fuel Review, Moment, Lilith, and Under The Gum Tree. Her songs have been licensed internationally for film and television. She’s at work on a memoir about (step)mother/ing and other top-secret projects. @relsilver

§ 6 Responses to A Review of Ana Maria Spagna’s Uplake

You are currently reading A Review of Ana Maria Spagna’s Uplake at BREVITY's Nonfiction Blog.