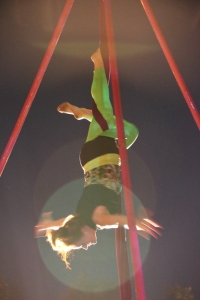 Technically, my hands are still full

When I was a temp, I wrote between phone calls on stolen photocopy paper; when I worked in bars, I used cocktail napkins. On long drives from circus gig to circus gig, I’d brace a notebook against the steering wheel on long, straight stretches of Georgia or South Dakota, scribbling notes for stories, phrases I liked, books I’d write some day. I kept thinking, if only I had a patron to pay my rent. An office. Free time. Surely writing would be easier with time on my hands. Of course I’d do more than an hour a day squeezed between shows, glitter and rosin smudging the paper. Diving into creative headspace would be easier full time. But I guessed I’d keep cranking out a hundred or five hundred or a thousand words a day until my fairy godmother appeared.

Now I have a big table in a sunny room, a freelance editing job with dwindling hours, and a husband who says, “Just write—you don’t even have to publish.” I have the free time and cash to go to writing workshops. I have a co-working space with lightning-fast wifi. I’m still excellent at filling my time. I answer email first thing in the morning, do clients’ pages before my own, make pretty PowerPoints for conferences and go speak at them.

On one hand, writing while physically and financially secure should be much easier. Not wondering where my next meal is coming from has given me time and space. But making writing my job-that-need-not-pay has also blunted some of the urgency. I don’t have to finish this essay now, it’s another fresh morning tomorrow. I don’t have to prove my talent or worth to all my co-workers, because I’m already surrounded with people who take writing seriously.

Back when I was a full-time performer, I told other entertainers all the time, “Quit your day job. You get better when you’re hungry.” In a field where every gig was a one-time booking and we often literally passed the hat after shows, making a full-time living depended on getting much better very quickly. If I wasn’t funny, I didn’t eat, so I got funny. Personal dignity became much less valuable when weighed against paying rent. Every comedian finds ways to abase themselves while still controlling the room, and dignity emerges out the other side brushing its sleeves. Dignity responds to, “Do you really make a living at this?” with “I’ve been a college professor, and this pays about the same, plus I don’t have to go to committee meetings.”

Not writing to eat slows me down, but I’m making better work—it’s more considered, careful, well-phrased. I don’t count on shock value. It’s no longer enough to write the story no-one else is brave enough to tell—it has to be told well. I take time over chapters I would have banged out ten years ago. In fact, it takes me just about ten years to write a book. Two years of generating material, two years of dicking around, four years of fallow time where the manuscript reproaches me from my desktop every time I open the laptop, and two years of getting down to business.

I hope it’s worth it. I hope the book I’m nearly done with will be better than if it took me two years or a year or nine months to write. But in the end, there’s no way to know.

At my desk, my husband picks up my fancy noise-canceling headphones, and says mock-derisively, “You don’t have a hardship in the world.” Then he shakes his head and says seriously, “Must make it hard to write.”

I still crank out a hundred or five hundred or a thousand words a day, and I do it in about an hour, squeezed in between editing and housework and social media. I can’t write more than a couple hours a day unless I’m in full-on retreat mode, sustainable only for a couple weeks in an isolated place where someone else is cooking meals. I watch TV, which was not a part of my life on the road, and my husband and I take turns pausing the show and predicting what’s going to happen next. Maybe it’s making me a better storyteller. Maybe it’s resting my brain. Maybe it’s wasting my time.

I’ll write when I’m hungry and I’ll write when I’m secure. More money and time doesn’t make me write (much) more, and I’m not going to feel guilty or sad about that. A book takes the time it takes, and that’s not anyone else’s timeline. Writing is what I do, and I do it at the speed I can.

§ 23 Responses to Writing While Secure

You are currently reading Writing While Secure at BREVITY's Nonfiction Blog.