The Madness of Book Marketing

Writers have peculiar behaviors, one of which is sitting alone day after day, month after month laboring over a notebook or keyboard, hoping that what we create in private will ultimately be enjoyed in public. We embrace the contradiction that writing is an act of solitude, but also a social one.

But this contradiction is not without it challenges, as evidenced by how often jarring it is to pull ourselves from the world we make on the page (even if it is nonfiction) to go about the reality of our day. More so, by how anxiety-producing it can be for the writer to move from the private act of writing to the performance of publication. Real time living hardly affords the control or revision of writing, and many writers agree that the months leading up to publication can be nerve-racking.

As someone for whom anxiety is a natural state—I was diagnosed with severe anxiety, OCD, and PTSD more than a decade ago—the marketing process for my book Quite Mad: An American Pharma Memoir proved more difficult than the writing process. I’d assumed that reliving my experiences with mental illness in order to write the book would be taxing, but the thought of marketing made me experience panic attacks and the general feeling that I was being crushed under the weight of my fragile writer ego.

I don’t exaggerate! I saw things, heard things. I counted, doublechecked, twitched. Felt organs sputter inside. In sleep, I ground holes in the mouthguard designed to prevent such grinding. Being “forthcoming” was not exciting. It was miserable. Marketing proved maddening, for as a human I prefer to go unnoticed, a quiet observer made fierce by the solitude of the page, but as writers, we want to be seen.

Hallucinations aside, I am not alone: many writers have reflected on the difficulties of marketing, the challenges that come from asking for attention in a world saturated with selfies and side hustles, the guilt we feel over demanding individual praise when the world seems to be collectively falling apart. I’ve witnessed writers judge others for posting too frequently about themselves, asking them to purchase a book, or simply sharing good news. “Shameless self-promotion” begins most social media posts as a result, an apology that sets the tone for how readers engage with the content. We require, it seems, both humility and humiliation of writers if we are to reward them with a ‘like’ much less the purchase of their latest project.

Once, I was hosting a dinner party for a dozen writers when news broke that a lovely absent friend had secured a two-book deal. Within moments the atmosphere changed from one of merlot’d merriment to acrimony, and most of the table never forgave the writer for their success. It is no wonder writers pause before sharing reviews or media mentions, feel such self-doubt and shame for hoping others will celebrate their accomplishments.

At this same dinner, however, my cat spied a toy mouse on the floor, meandered over and began yowling victory as though a brutal battle had ensued, a bold albeit lazy performance that prompted delight from guests. Years later, I still wonder why our friend’s literary accomplishments seemed suspect while a housecat’s guttural gloating was cause for applause.

There is much practical advice about marketing—don’t dwell on reviews if you are lucky enough to receive them, try to work on new writing but don’t be disappointed when this is difficult or impossible, remember that “book tour” is code for awkward writers, small crowds, and strange questions that aren’t really questions. For me, however, the best strategy leading up to publication was not marketing myself, but supporting other writers, many whom were also in a forthcoming frenzy. This allowed me to engage with the literary community in ways that were sustaining rather than suspicious, and to foster connections with people who love words rather than wondering why family members I’ve never witnessed reading weren’t eager to talk about my writing. Most important, championing good work helped me remember why I love writing and writers in the first place.

I am a patient, enthusiast, forgiving reader. (I may be a better reader than person.) When I find a piece I love, I read it again and again until the muscles in my face have memorized the movement. I read it aloud, often with waving hands, to anyone who will listen. I geek out, students held hostage by my syllabus, or my partner, who cooks dinner while I pace the kitchen ranting about the best metaphor ever before finding another best

I fall hard for writers, reading everything they’ve written, swooning over their language, acquiring extra copies to fling at others like it’s December and I’m hosting my own Favorite Things episode. And yes, like anyone in love, I send mushy messages to writers I admire, though I try to keep the XOs to myself. When I encourage students to contact writers they love, they return to class shocked, whispering, “They actually wrote back.” 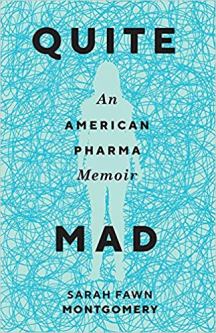 The first email I received from a reader about Quite Mad made me catch my breath. I was in the midst of months of mental illness setbacks, uncertain when or if they would end, gasping and heaving, existing beyond going to work and returning home seemingly impossible. I was seeing and hearing things, experiencing panic attacks for several hours each day, convinced a piece of ice was a shard of glass that had slit me belly to bowel on the way down, or that I’d drunk bleach, or that a vein was about to burst. I could not bear to exist in the cage of my body let alone think about marketing my broken self to others. Who would want to read a story about a skittish, frightened brain, a woman so afraid she could not look in the mirror without panicking?

The reader was writing, she explained, because she felt the same, because my book about panic and compulsion and trauma made her feel normal for once and less alone. And suddenly so did I—the private had become public and I had not died or caught fire or shriveled like a tuber into the earth or all the other terrible things anxiety convinces us will happen if we prove fallible.

My mental illness did not disappear with this small praise, just as the release of my book has not quelled it, but this kindness reminded me of the importance of small literary acts—an email to a writer, sharing a beautiful line with others, buying books, gifting books, teaching books.

The way I see it, we have two choices: We can ruin the dinner party by dismissing well-deserved accomplishments (either those of others, but more often than not, our own), or we can yowl. Writing an essay or poem or story, or hell, a whole book, is much more demanding than rolling over and spotting a faux mouse, yet we hesitate to celebrate.

Sarah Fawn Montgomery is the author of Quite Mad: An American Pharma Memoir and the poetry chapbooks Regenerate: Poems from Mad Women (Dancing Girl Press), Leaving Tracks: A Prairie Guide, and The Astronaut Checks His Watch (both Finishing Line Press). Her work has been listed as notable several times in Best American Essays, and her poetry and prose have appeared in various magazines including Crab Orchard Review, DIAGRAM, Electric Literature, LitHub, The Normal School, Passages North, The Rumpus, Southeast Review, Terrain, and others. She has worked as Prairie Schooner’s Nonfiction Assistant Editor since 2011 and is an Assistant Professor at Bridgewater State University. You can follow her on Twitter at @SF_Montgomery

§ 10 Responses to The Madness of Book Marketing

You are currently reading The Madness of Book Marketing at BREVITY's Nonfiction Blog.