A Review of Jenny Boully’s Betwixt-and-Between: Essays on the Writing Life 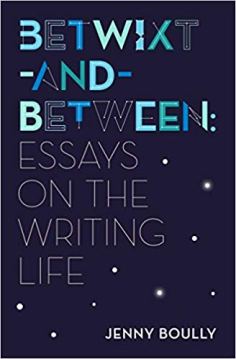 “Betwixt” is an archaic term for between, so from the very beginning the book’s title signals a kind of fluidity. The first essay, “the future imagined, the past imagined,” uses verb tenses to explore the shifting nature of time and desire: “we write in the past imagined when we write about old love affairs, because nothing is as unreal, as dreamy as love. And nothing is as confusing, as cryptic, as encoded as what occurs, as what is said, when we leave a love affair and suddenly have to live outside of that dream, the dream where something could occur, might occur, should occur, would occur, could have occurred, might have occurred, should have occurred, would have occurred.”

Much of Boully’s writing occupies this liminal space between reality and dream, is and could, did and could have. “Forecast Essay” takes on the predictive, musing on preservation and destruction and how we can keep what we have – or had. “On the Voyager Golden Records” speculates how far into space that “snapshot of the world” will travel, and how far Boully’s own writing will reach in her lifetime. And “Between Cassiopeia and Perseus” mourns the end of a love affair at the end of summer, when both the heat and the clouds conspire against seeing both the Perseid meteor shower as well as one’s new place in the world.

Some of the essays that have more straightforward titles and headings, like “How to Write on Grand Themes,” still surprise the reader with their unexpected leaps into imagery and metaphor.  Expected writerly advice like the section “Pay attention to detail” also urges, “Don’t close, do close your eyes. You will wish, it will never happen again. The aforesaid moment already acting as artifact – the teacup so lonely, so empty.”

But Boully doesn’t always take the unexpected route. She can also be brilliantly direct, as she is in “The Page as Artifact” when she claims, “If you’re spending too much time on the page and not enough time outside the page, then you’ll need to find more time to find poetry.” And in “On the EEO Genre Sheet” Boully pointedly states, “The term ‘other’ … immediately connotes an agenda: If you don’t fit into one of our predetermined categories, well, you aren’t playing the game correctly.”

But who wants to play this particular game – and correctly?  From the beginning, in her preface, Boully tells us that she has become attached to “hesitations, refusals, yearnings, oscillating and uncertain desires.” She describes her writing life as “a place where writing that isn’t quite this or that exists, writing that strives or serves to make manifest the inner workings of a life that isn’t quite about writing nor quite about living.” Like Peter Pan, both Boully and her work draw us to a threshold where we are “not wholly living in make-believe nor wholly living in the consequential world.”

Shifting and resisting, Boully has given us a collection of essays that also functions as a craft book in motion – not a set of directives but evidence of a writing life lived. It is everything we could want, but not as we expect. As Boully says herself of her own work, “I may look like an essay, but I don’t act like one. I may look like prose, but I don’t speak like it. Or, conversely, I may move like a poem, but I don’t look like one.”

Randon Billings Noble is an essayist. Her lyric essay chapbook Devotional was published by Red Bird in 2017, and her full-length collection Be with Me Always is forthcoming from the University of Nebraska Press on March 1, 2019. Other work has appeared in The New York Times, Brevity, Creative Nonfiction, and elsewhere.

§ One Response to A Review of Jenny Boully’s Betwixt-and-Between: Essays on the Writing Life

You are currently reading A Review of Jenny Boully’s Betwixt-and-Between: Essays on the Writing Life at BREVITY's Nonfiction Blog.