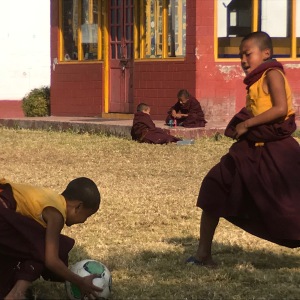 It’s midnight in New York but I’m already twelve hours into 2019, because I’m in India. Last night I ate Chinese food and passed the leftovers through a taxi window, saying to the beggar, “It’s non-veg, OK?” Last night my taxi driver pulled over by the side of the road so he could pee against a wall. Last night I was already in bed and mostly asleep by midnight, waking only to type a little bit on a book-in-progress, because my personal superstition is that whatever I’m doing on New Year’s, that’s what my year will be like.

Last week I had almost no WiFi, power or heat, and crashed my computer moments before getting on a plane to a part of north India with no Apple Store. Mostly, it was exhilarating, and good to be off social media. It was also a pain in the ass, making it difficult to return editing projects or even work on them. In one of the few moments of cell reception, I instinctively checked my email.

Of course there was a rejection, a painful one. I’d tied a lot of hope into that submission, and the rejection was kind and thoughtful and had a bit of feedback. But for the first time I had the feeling I’ve heard other writers describe but hadn’t personally felt: I wasn’t a writer any more. This was it. I didn’t want to write anything again, ever. Sure, I’d probably edit some people’s work for money, but writing wasn’t for me, it wasn’t about me, it wasn’t a world I belonged in. I was wasting my time. Part of my brain was gently reminding me, You tell writers all the time that one rejection doesn’t mean anything, it only means your work wasn’t the right fit for that person at that time. But I cried myself to sleep as quietly as possible so I wouldn’t wake my husband, and I’m crying as I write this now, because it still sucks.

That’s the missing piece for most of us as writers. We believe that somehow, somewhere, there’s a place for us where writing doesn’t suck. Where we’re happy with our quality of work, we’re getting published enough in the places we want that rejection still stings a little but doesn’t debilitate us. Where we can see the light at the end of the tunnel, even when the tunnel’s long.

That’s writing’s nasty little secret. That’s the horrible underbelly of great art, the Achilles’ heel of incredible physical prowess, the flip side of being good at anything.

Being good doesn’t lift you out of failure.

In fact, the better you get, the more awful failure feels, because you can’t let it go with “Oh, I wasn’t ready,” or “Yeah, that magazine is just really hard to get into.” You start to feel like you’ve paid your dues, you’ve put your time in, and when is success going to show up please, because it’s getting late?

All of those situations feel the same on the other end. They all feel like “I suck,” and “I suck” is a hard feeling to climb out of.

As writers, we are told over and over again, it’s hard work. Just keep doing it. We try our hardest to believe that, while still hoping it’s not true. While hoping the feeling of writing something wonderful, something we’re really proud of, will carry us through rejection and writer’s block and ennui, and sometimes it does.

The day after the Olympic trials, the gymnast who failed has two choices: Quit, or go back to the gym. It sucks to go back to push-ups and flip drills and conditioning when you know your friends are training for the big time. But it’s easier to condition than to create new choreography from the depths of heartbreak. It’s easier to embrace the routine.

Right now, what I’d really like to do is get on a plane and fly across time zones until I’m back when the rejection hadn’t happened yet. What I’d like to do is quit.

What I’m actually doing is writing a blog post in a hotel lobby, after working a little on a novel and a lot on a writing craft book. Trying to practice what I preach about showing up when it’s not fun. Putting together my writing goals for 2019: Finish another novel, finish the craft book, write another play. Say yes to enough editing to make money. Say no to enough editing to have time to write. Show up for my fellow literary citizens. Show up for Brevity readers. Show up for the writers whose work is going well and for the writers who feel like they suck. Show up to the page. Show up, show up, show up.

According to my superstition, my 2019 will have low-key charity, unexpected public urination, and writing whether I suck or not, because I’m committed to the routine.

What will your writing year bring?

Allison K Williams is Brevity’s Social Media Editor, and truly sorry for being such a downer today. Why not leave your 2019 writing goals in the comments, and we’ll check back in six months?

You are currently reading Time Travel at BREVITY's Nonfiction Blog.