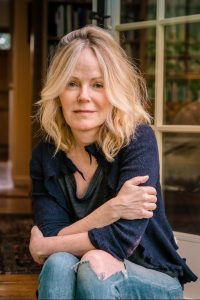 I often tell people in the throes of a break-up, “Every relationship we’re in teaches us a little more about who to be in the relationship we’re meant to be in later.” It’s a little convoluted, but it comforts me to believe that, to think that the awful things my first husband and I did to each other helped us learn how to be honest and kind to our current spouses. But it’s hard to look ahead from within the moment of trauma, to try to process or analyze what’s happening to us in a larger sense.

Writing memoir often requires distance. Many writers have both given and received the advice, “Take some time, allow yourself to step back. Don’t write from the heat of the moment.” It’s usually very good advice. We are far more able to present our actions, and the actions of others, without judgement, allowing the reader to decide whose side they want to be on, with some time away from the events themselves.

Dani Shapiro has both given and believed this advice. But her writing process for her recent memoir, Inheritance, countered the received wisdom. In an interview at The Millions, she says:

In initially trying to get what was happening to me down on the page, I was writing from the center of trauma. There’s that moment in my book when I quote from Bessel van der Kolk’s—I don’t have the quote exactly right, but it’s something like, “It’s the nature of trauma that doesn’t allow a story to be told.” It’s the reason why people who are in a traumatic state repeat themselves, and need to keep telling the same story over and over again. But that does not make for good literature—although I want to interject and say that I do think there is one literary form in which you can write directly out of trauma, and it’s poetry.

At first, this process didn’t seem to work for a memoir. She’d taken two months away from the manuscript, and when she came back to it:

I took myself to a local café where I like to read, and I started reread and my heart just completely sank. It had some passages that worked, but as a whole, it simply was not the book I wanted to write. And I was in despair. I went home and told my husband, I know that this is productive despair, I would tell any writer telling me this story that it is productive, and that this is going to end up being a good thing, but it didn’t feel that way. It felt like despair with a capital D.

What helped Shapiro was considering Joan Didion’s work in The Year of Magical Thinking.

In my memory of the book, she was writing from the center of her husband’s death. But when I started rereading it, I realized she actually found a place that is slightly removed from, that was outside the sphere of direct shock and trauma. She was writing from that spot, which allowed her to move back into the immediacy but also away from it in a way that allowed her to tell a story.

Shapiro’s work ended up mirroring that process, finding a way to tell what happened to her with a sense of immediacy, but without herself (as writer or as narrator) actually living within that moment of trauma as she wrote.

As memoirists, the ability to summon up the immediacy of our trauma without being sucked into it as we write is valuable. It’s difficult to walk that edge of telling what happened vividly enough for the reader to be in the moment of happening, while maintaining enough remove to use our writing craft and sense of structure, but that edge is what divides memoir from therapy, what makes a story powerful and life-changing for the reader as well as the writer.

Shapiro’s discussion of her process is illuminating; read the whole interview here.

§ 2 Responses to Writing From Immediacy

You are currently reading Writing From Immediacy at BREVITY's Nonfiction Blog.