A Review of Paul Crenshaw’s This One Will Hurt You 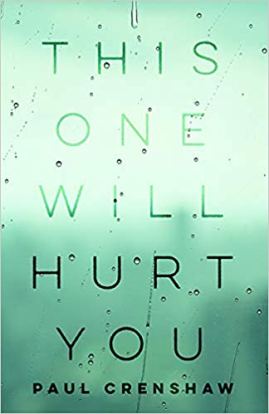 A melancholic thread runs through Paul Crenshaw’s collection of narrative essays, This One Will Hurt You, set in the Ozarks, specifically northwest Arkansas, where the writer grew up. He opens with “After the Ice,” remembering his eighteen-month-old nephew who cried in the arms of his “stepfather, who looked frustrated or angry or even lost,” but would quiet when the writer, young and inexperienced in comforting babies, had held him. This memory sticks with him, haunts him, probably always will, knowing now the baby died from being shaken by his stepfather.

“… what is left is a deeper feeling than sadness,” he writes. “But it is less painful. It is like the trees in November, or birdsong before first light; something intangible, full of heartache; a child’s clean smell, a faint memory of your mother, a daughter’s first step.”

Crenshaw weaves poignant images throughout these essays, capturing beauty, mystery, and pain embedded in the hills and streams of the real Ozarks—not Netflix’s made-up version with characters one-step removed from the Beverly Hillbillies, now re-fashioned into con artists and grifters. Netflix’s Ozark isn’t even filmed in the Ozarks, but in Georgia.

Crenshaw takes us to the real place where a pregnant kindergarten teacher plays classical music to her unborn fetus by placing headphones on her abdomen during naptime; where a ghost haunts an abandoned tuberculosis hospital; and where a fifth grade fire-and-brimstone teacher tells the whole class, you’re all going to hell.

This is the Ozarks that I know, the place where my ancestors claimed land under the Homestead Act of 1862 and built their farms. Most of my family still live in this rural, rocky, and somewhat isolated region (a little northeast from where Crenshaw grew up). The bustling little communities that once dotted the hillsides have turned into ghost towns, due to recessions, factory shutdowns, and tighter government regulations on small farmers. People who live in the hills and down rocky, dusty roads, tend to be stubborn, hardworking, self-sufficient, and adept in dealing with adversity. They grow their own food, raise cows, pigs, and chickens, can vegetables, bake bread, sew quilts, and barter for whatever else they need.

“Those who stay here are forced to try to make a living where there is no living to be had,” writes Crenshaw (who left the Ozarks for North Carolina eleven years ago). In “The Night Before Christmas,” he returns to northern Arkansas and is alarmed to see so many burned-out houses—crystal methamphetamine labs.

Curiosity prompts him to track down five government-seized meth houses. He discovers three have fallen or burned down, but two remain and have toys and bicycles strewn across the yards. “Thirty percent of seized labs have children living in them,” he writes. “In some states, over 50 percent of children in protective services come from meth seizures.” The harsh chemicals soak into the walls and flooring. What long-term effects this has on children remains unknown. However, Crenshaw, who has his own kids, worries about them.

If poverty, remoteness, and drug abuse don’t pose enough of a strain on this region, add the weather, which can seem biblical at times. In “Cold,” he writes:

The summer heat could knock you senseless, suck all the air out of your breath, and in spring, storms whirled up every evening, sending tornadoes out into the lightning-struck night, but when I think of winter I remember the constant cold, the chill air that came down from Canada to frost the fields and sheath the trees in ice. Wind whistles in the chimney, and we’d huddle close to the fireplace for any warmth left lingering in the stones.

While snow isn’t a big problem here, the ice can glaze everything, turning highways into skating rinks, breaking the trees, seeping into the shingles, pulling down phone and powerlines, leaving rural people isolated for weeks.

Yet, Ozarkians soldier on, an attitude Crenshaw demonstrates in the final essay. He and some of his buddies get together on Sunday to relax, drink beer, and watch football. Yet, they’re unable to let loose and really relax between the drunken couple across the street brawling in the front yard to another neighbor making crack deals to a feral dog stalking a kitten across the backyard.

“This One Will Hurt You,” warns Crenshaw, and he’s not kidding. I’m not going to give anything away here. However, I will say, the writer has to make a devastating choice, and others may criticize how he handles it. Yet, he turns this around, practically confronting readers, So, what would you do? Truth is, we want to believe we’ll never face life-and-death moments.

“I don’t remember if we said any words or not,” he writes in the conclusion. “I doubt they would have meant anything. We are shameful creatures, scared of death…. We stood in the gathering darkness and drank, trying to forget, which I can tell you for sure never works.”

Crenshaw searches the soul and wrestles with hard realities and bitter truths, and his essays will cling, fast as a burr.
___

Debbie Hagan is book reviews editor for Brevity and visiting lecturer at Massachusetts College of Art and Design. Her writing has appeared in Harvard Review, Hyperallergic, Pleiades, Superstition Review, Brain, Child, and elsewhere. Her essay “Gargoyles” will appear in the upcoming anthology Fearless: Women’s Journeys to Self-Empowerment (Mountain State Press).

You are currently reading A Review of Paul Crenshaw’s This One Will Hurt You at BREVITY's Nonfiction Blog.