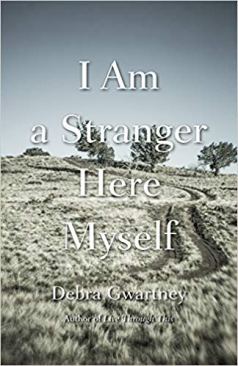 Debra Gwartney knows this. It’s evident in her extensive body of work, including her first memoir, Live Through This, finalist for the National Book Critics Circle Award and the Oregon Book Awards. Since then, she’s published essays in journals and anthologies that turn the lens inward, confronting her own vulnerabilities.

Gwartney’s second book veers from the traditional structure of memoir, using a lesser-known historical event as a springboard for her own personal narrative. In I Am a Stranger Here Myself, Gwartney juxtaposes her memories with the story of Narcissa Whitman, one of the first white women settlers to journey westward. This genre-bending manuscript won the 2018 River Teeth Nonfiction Prize and publication this past March.

A fifth-generation Idahoan, Gwartney first learned about Narcissa in fourth grade. As an adult, she moved away, raising her family in Arizona and Oregon. Every trip back to Idaho, Gwartney confronts her complicated tie to her ancestors’ land. She writes this book with a burning desire to prove she’s part of the land where her family once had shops with their surname proudly displayed, and where her relatives hunted, rafted, and served in the community.

The book is structured into four sections, relating events in Narcissa’s life to Gwartney’s life. Clearly the writer differs from Narcissa. She lacks the pioneer’s religious fervor and her proselytizing ambitions. “But like Narcissa, I stayed. I did what was expected of me. I stepped into the only adult life I would let myself want,” she writes. Gwartney’s interest in Narcissa comes from a deeper place, especially looking closer into the first few years after Narcissa has arrived in Oregon and her only child drowns. Gwartney links to her own near-death accident, making a risky choice to raft along Idaho’s Salmon River. Chapter after chapter, Gwartney uncovers differing accounts about Narcissa, each contradicting the next and molding the independent pioneer woman into a more and more complex character.

Narcissa isn’t a role model of western expansion, but rather Gwartney’s conduit to understand her own complicated relationship to the land and her own family. During a trip back home as an adult, she inherited a book about Narcissa from her grandmother’s library, “a version of history set down in black and white, never to be altered,” she writes. “And hadn’t I done the same with my own? Told and retold the stories of my childhood so often that the memories finally calcified. Probably time to break it apart, my own past and, for some reason I had yet to decipher, hers.”

In a story which Gwartney narrates with such detail, richness in description, and thoughtful reflection, she also embarks on her exploration fully aware of the stakes involved. Even though this story is about white pioneers venturing into the wilderness with the earnest ambition of doing God’s work and saving the “savages,” Gwartney acknowledges the unforgivable displacement of Native American tribes. She points out the faulty political rhetoric that diminished the natives’ claims to the land, along with the post-Whitman vengeance laws allowing U.S. Marshals to kill “any Native American deemed a threat to life and/or property.” As Gwartney passes the problematic art in a hotel that portrays Native Americans as inhumane, she recalls in her research when two chiefs of the Cayuse tribe were forced to sign the treaty in 1855, thereby handing over their lands to white settlements.

On the surface, my life is nothing like Gwartney’s. Contrary to the author, I lack the generational roots to a place, because I’m the daughter of an immigrant. But the driving force in Gwartney’s memoir is the need to claim her place in the family and the land she came from, a people and life that she was raised in but then left. When reviewing my own essays, I’ve noticed that same desire shines through my words. I hoped that in returning to my father’s home country, I could unearth my link to my own ancestors. I wanted to know that even with my father’s decision to move to the other side of the world, I could touch down in India and feel an innate bond to home. Everyone wants to belong, so maybe it’s not a surprise that this memoir exploring home in the American West resonates with me, a second-generation immigrant.

Gwartney’s latest book reshapes memoir, adhering to its central tenets, yet branching into new forms that enhance the narrative. In this hybrid of memoir and history, Gwartney has created her own style of storytelling.
___

Anita Gill is a teacher and a writer based in Los Angeles. Her essay, “Hair,” was the winner of the 2018 Iowa Review Award in Nonfiction, selected by Kiese Laymon. Gill’s work has appeared or is forthcoming in Prairie Schooner, McSweeney’s Internet Tendency, The Rumpus, The Iowa Review, and elsewhere. She will be a Fulbright Fellow to Spain for 2019-2020.

You are currently reading A Review of Debra Gwartney’s I Am a Stranger Here Myself at BREVITY's Nonfiction Blog.