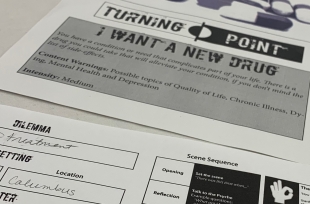 Prototype materials from “Turning Point.” A QuickStart version of the game will be published by Encoded Designs and released on DriveThruRPG.com in July, and there are plans to bring the full book to Kickstarter in January, 2020. Photo credit: Vivian Wagner

At Origins Game Fair in Columbus, Ohio last month, I played a soon-to-be-released collaborative role-playing game called “Turning Point.” Unlike RPGs that focus on dungeons and elves, this one focused on a woman in a contemporary setting trying to decide whether to undergo a new treatment for her chronic fatigue syndrome.

It was a remarkable and moving experience, one that illustrated for me the ways that role-playing games exist in a permeable and fluid space between fiction and nonfiction, game and story. Over the course of playing the game, which was led by Senda Linaugh, who co-designed the game with Phil Vecchione, we worked together to construct and act out scenes from our main character’s life. I found myself telling stories that were, at least in part, based on my own experiences, and it was fascinating to see how we wove a collaborative character out of the particulars of our lives.

In the beginning, the game had several scenarios from which to choose. The one we went with was called “I Want a New Drug.” The basic premise of this scenario was that our main character would have an illness and be in the midst of deciding whether to start a new treatment for that illness. Together, we had to determine the specifics of the character, the illness, and the treatment.

Our character, we decided, would be named Violet. She was 49 and lived in Columbus, and she’d recently been divorced. In order to better live with her chronic fatigue syndrome, she was considering an experimental treatment that used soundwaves that would be delivered via an implant in her skull. We recorded the specifics about Violet’s life on a character sheet, including the fact that she had a cat and liked to knit and crochet, and then we had to improvise and act out several scenes from her life. Ultimately, our goal was to understand key components of her personality and experiences that would lead her to decide to go with the treatment or not.

One of the first scenes we did had to be with someone in her life who’d been ill. I jumped in and said I’d play a young Violet speaking with her bed-bound mother. All of a sudden I found myself constructing a scene that echoed elements of my relationship with my own mother, who had been ill with emphysema and bed bound for most of the latter part of her life. Through tears, I acted out a scene with Linaugh, who played the mother. As we improvised, others threw plastic heart tokens to the center of the table—one of the ways we measured the effectiveness and importance of various scenes.

I was surprised how without thinking I was drawing on real experiences to construct a narrative in a presumably fictional game. There were layers of meaning and experience in this game, I realized, that transcended any traditional notion of play. As we progressed through other emotional scenes, I realized that others were drawing on similarly personal elements of their own lives to construct this story.

Playing an interactive, collaborative, improvisational game is not exactly the same thing as writing either creative nonfiction or fiction, to be sure, but it seems to me that it could be considered a kind of emerging subgenre of both—one that will likely appeal to new generations of creators who’ve been raised on video games and have come to expect some degree of interactivity in their art.

At the end of the game, we tallied up various votes and tokens, ultimately discovering that Violet decided to do the treatment. She was ready to experiment, to try a different path. And I think we, as storytellers, might be, as well.
_________
Vivian Wagner lives in New Concord, Ohio, where she’s an associate professor of English at Muskingum University. Her work has appeared in Slice Magazine, Muse/A Journal, Forage Poetry Journal, McSweeney’s Internet Tendency, Gone Lawn, The Atlantic, Narratively, The Ilanot Review, Silk Road Review, Zone 3, Bending Genres, and other publications. She’s the author of a memoir, Fiddle: One Woman, Four Strings, and 8,000 Miles of Music (Citadel-Kensington); a full-length poetry collection, Raising (Clare Songbirds Publishing House); and three poetry chapbooks: The Village (Aldrich Press-Kelsay Books), Making (Origami Poems Project), and Curiosities (Unsolicited Press). Visit her website at http://www.vivianwagner.net.