Catbird Brain for the Writer 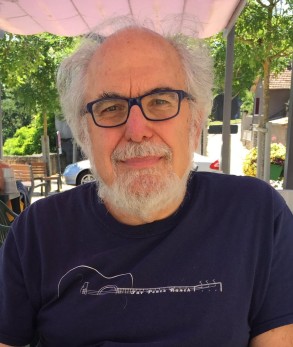 I was writing on the back porch a couple of weeks ago, or, more accurately, trying to write, when a catbird perched on our roof and began running through every song and noise he knew. There may have been female catbirds in the area he was trying to impress—the size of the male’s repertoire apparently does matter to female catbirds. Or, he may have had no motivation other than pure idiotic exuberance. He imitated the songs of other birds, then switched to imitating humans with a few telephone ringtones and a doorbell. He punctuated his routine with random buzzes and beeps, the ever-popular clicking ratchet sound, and the almost-meow that gives catbirds their name. It was entertaining listening, but not all that helpful for writing.

The catbird’s performance did lead me to a useful insight, though; I realized that there’s a catbird lobe in my brain, up there in its catbird seat, watching as the rest of my brain tries feebly to string together words and doing its best to “help.”

If my catbird brain sees that I’m trying to write something original (which should always be the case, of course), it will help by imitating everything I’ve ever read—Didion, DFW, Montaigne, Danielle Steele, cereal boxes, etc. If I’m trying to think of the perfect word, it will suggest dozens of less-than-perfect words. If I’m trying to be lyrical, then it’s time for the ratchet and doorbells and ringtones. Why do you want to work so hard, the catbird asks? Why not do something fun instead, like Sudoku, or Twitter, or YouTube, or just make noises?

If I do manage to write something despite its help, the catbird ridicules it, echoing my own insecurity about the piece by repeating my internal critiques in a sarcastic tone—metaphorically crapping on it.

Maybe the best strategy is this: if you can’t ignore the catbird, be one. Write for the pure exuberant idiocy of it. Listen to the entire world and everything in it, mix it all up, then get up on the roof and sing it all back at the top of your lungs. Let the words pour out, then sieve out the buzzes and beeps and look at what’s left. It works for catbirds.

__
Chris McGlone is currently an MFA student in creative nonfiction at George Mason University. In his previous life as a photogrammetrist he published a number of technical papers and book chapters and co-authored a textbook. Other interests include playing Irish guitar and bluegrass banjo. He is on Twitter as chrismcglone75

§ 5 Responses to Catbird Brain for the Writer

You are currently reading Catbird Brain for the Writer at BREVITY's Nonfiction Blog.