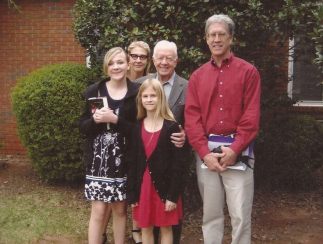 Ned Stuckey-French was an essayist and a scholar of the essay, a book-review editor and an anthologist. He was an author, an English professor at Florida State University, a generous reader, a connection-maker, an advocate for anyone attempting what he termed “this queer little hybrid thing,” the essay. A tallish, lanky fellow with thick glasses and a runner’s build, Ned was political, and he was personable. He was a wise-ass, he was a warm soul. He was Ned, and he was on Facebook.

“I’m on Facebook every day,” Ned confessed at AWP in 2011. The name of his talk: “My Name is Ned and I’m an Addict.” To Ned, Facebook was a meeting place abuzz with opinions and gossip and news of the day. It was a tool of democracy, a forum for hashing out political disagreements and plying rivals with logic and facts and more reasonable truths. It was a digital dynamo of discourse, a sprawling harbor of humanity, a portal for engaging the world.

Ned poured words, millions of words, onto that medium. Even when classes were in session, or when he was traveling, he posted articles supporting unions, and universal healthcare, protections for the marginalized and dispossessed. In sharing these pieces and welcoming discussion, Ned fashioned himself a champion of the left. He never backed down from his “fundamentalist, right-wing brother-in-law,” as he called him, who swooped in to decry liberal idiocy and hypocrisy. He didn’t back down from that brother-in-law’s friends, either, tagged and recruited to the debate. Back and forth, paragraph after paragraph. “I enjoy butting heads with them,” Ned said. “It’s a way to be in touch with a group of people I might not otherwise be in touch with.” Hard-line conservatives, that is. Staunch Republicans.

On-lookers didn’t know who these people were–Ned himself hardly knew. They were Facebook addicts as well. Some brave progressives jumped into the fray and Ned engaged them, too, pleading for humanity while sizing up their logic and dishing out sources, good ones. A daunting task–to take so many stances, to mount so many arguments. To return day after day and articulate an evolving set of positions. Ned qualified his allies and refuted his opponents, always trying to figure out exactly where he stood. He was developing a platform, a worldview. He was forging a unified theory of Ned.

The threads were epic, endless, always growing, an expanding universe of discourse. The replies grew by the dozens, sometimes reaching triple digits. Trump’s political ponzi scheme. The virtues of Black Lives Matter. When did Ned teach? When did he sleep? The posts and comments, likes and shares kept coming. Politics, sure–no one was a bigger fan of Jimmy Carter, as evidenced by the family photo he’d taken with the former president and himself, his wife, and his two daughters, all beaming in the Georgia sun. But every new track & field record, the latest amazing golf shot, scores of great new essays. His voice was eager as he cheered on his students and colleagues writing their own lives. “Onward!” he cried, and “Go get ‘em!”

“We are in the age of Facebook,” Ned said in 2011. “The toothpaste is out of the tube.” Even then, Ned admitted the platform was a timesuck that played on our pettiest instincts. But he also marveled at the site’s ability to memorialize those who pass away. What would he say about the outpouring on his own wall since he passed? A thousand things, no doubt. Just as he did each year on his birthday, he would’ve left a thoughtful, personal, wise-cracky comment on each post. He would’ve engaged.

Over the years Ned learned alongside everyone else Facebook’s deeper dangers, the misinformation, the polarization, the true customers: the advertisers. Yet Ned was on there all the same. He was on there for the people, for the conversations. He was on there precisely because Facebook is democratic, in the worst and best senses of the word, and Ned believed in public discourse. Ned never took a break, never needed a cleanse. Ned was on there, posting and sharing and liking and loving and thinking and rebutting and becoming. Till the very end, Ned was on Facebook.
___

Paul Haney was a student of Ned Stuckey-French’s, a friend, and a golf partner. His work has appeared a few times in Ned’s book review section of Fourth Genre, as well as Slate, Boston Globe Magazine, Cincinnati Review, Essay Daily, Sweet, and elsewhere. He serves as Managing Editor of Dylan Review. Follow him @paulhaney.

§ 5 Responses to Unified Theory of Ned

You are currently reading Unified Theory of Ned at BREVITY's Nonfiction Blog.