After a lifetime of spurning “self-help books,” I bought a copy of Julia Cameron’s The Artist’s Way and joined a local support group to help me navigate a new spiritually-charged creative path. This book has been a go-to guidebook to discovering the life of an artist for twenty-five years, but only recently did I feel ready to tackle it.

At the first group meeting, we began by introducing ourselves. It turned out that most of us pursue various forms of writing. One woman identified herself as a painter, and I said, “My mother-in-law was a painter.” I could have bitten off my tongue because who cares? Why did it matter that my mother-in-law was a painter? An hour later, as I listened to the others talking about the artistic paths that led them to this first meeting, I experienced a rare epiphany.

Cameron’s system rests on two major repetitive activities—morning pages, which are essentially journal pages, and artist dates, where the artist performs a viewpoint-shifting solo activity. In addition, the artist performs a variety of tasks each week. In the first week, Cameron urges the reader to “list three old champions” of her “creative self-worth.” These people have provided affirmations to the reader’s creative spirit.

I struggled to answer the question, although certainly the poet and teacher who encouraged me to put together my first poetry book deserves a space on that list. The literature professor who used to read and comment on my short stories, although creative writing wasn’t her field and the stories not written for her classes. The well-known poet who wrote me when I was first submitting poetry to say that my poems were cogent and real. The truth is that when I pulled out that treasure from my files, I realized he was trying to sell me his summer workshop. 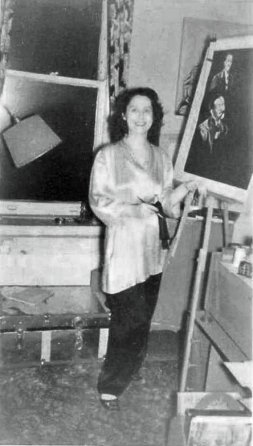 How had I developed a resilient creative life when the affirmations had been so limited? I hadn’t felt much support at home for my creativity, although my parents had never mocked my attempts and had even provided art, piano, and ballet lessons (the two latter subjects chosen by my mother, not by me). What I realized in a burst of “knowing” was that specific inspiration, and not affirmations, had allowed me to reach a point in my life where I can say the previously verboten words: I am a poet. I am a writer.

My mother-in-law was a painter who fully lived her life as an artist. Everyone she met knew she was an artist. Being a painter was never a second or, worse yet, secret identity. She exuded confidence in her art, never comparing herself with other artists. She invited others into her world by envisioning them through her artistic lens and sharing what she saw. She sketched at the coffee shop and while she waited in the mechanic’s office for her car. In-progress canvases and an easel took up the backseat of that car, an old Opel that smelled like oil paint when one climbed into the passenger seat. My mother-in-law showed me how to accept my artistic identity and to embrace it. As I looked around at the people in my group, I wanted to share this epiphany, but more understanding was still materializing in my mind.

Not only had my mother-in-law provided the inspiration to live the life of an artist, but my daughter had inspired me to come to my art with all my heart and efforts. A brilliant dancer from a very young age, she often heard people mention how she “danced her heart out,” and that is how it seemed to the audience. But she always found more heart to give. As she matured, she displayed the vocal and acting talents to match her dancing. As a teen, she worked hours every day, developing her skills. By her senior year of high school, she was a leader in dance, drama, and choir departments. She was accepted to a top-notch university musical theatre program and completed the four year BFA program. Throughout this time, she also auditioned for and performed in professional shows. After graduation, she continued auditioning and performing.

Only by going through this process or closely watching someone who is doing so can one realize the difficulties and hardships of the audition-perform cycle. Submitting poems to journals and watching them come bouncing back is nothing compared with the very personal rejection often served to one’s face at an audition. Scheduling conflicts popped up between auditions, between shows, with doctor visits, and survival jobs contributing to high-level daily stress. In the midst of all these issues, my daughter, like many performers, continued to train as she could fit it in. After all, artists need to keep learning and sharpening their skills. I watched my daughter go through this with grit and industriousness for so many years that when I decided to go back to my writing, I unconsciously modeled myself as a hard-working artist on her lifestyle.

I never needed to look far afield for affirmations. I found inspiration in my own family and integrated the lessons of my mother-in-law and my daughter into my outlook and my artist’s life. I owe an enormous debt to these two dazzling artists. I wish my mother-in-law was still around for me to thank her, but I am blessed to be able to thank her granddaughter.
__

Poet and writer Luanne Castle has published in Copper Nickel, TAB, Verse Daily, American Journal of Poetry, and many others. Her first poetry collection, Doll God, was winner of the 2015 New Mexico-Arizona Book Award. Luanne blogs at writersite.org.

§ 55 Responses to Modeling The Artist’s Life

You are currently reading Modeling The Artist’s Life at BREVITY's Nonfiction Blog.