A Review of Dorothy Rice’s Gray Is the New Black 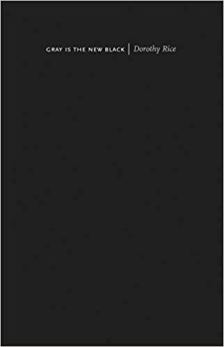 I love a book that is unapologetically female. The market is brimming with explorations of female experience, books that examine issues such as food addiction, shame, sexuality and the process of aging. Men struggle with age, I know. Each time I complain about my gray hair, my husband points at his head and says, “At least you have hair.” But when it comes to perennial dieting, body shame, and loss of youth, women struggle in much different ways.

I devoured Hunger, by Roxanne Gay, and I’ve read everything by Brene Brown. I relished Lisa Taddeo’s Three Women, an exploration about female desire. I am astonished to see the thread of shame and scarcity running through my own life. Even at middle age, I don’t know what I want. In fact, in an effort to immunize myself against disappointment, I’ve made a habit of not wanting anything at all.

When I found Dorothy Rice’s memoir, Gray is the New Black, the book felt like a cosmic gift. In this memoir of self-acceptance and healing, the writer lays bare her disappointments and struggles with sugar addiction, dieting, and bad men. What’s more, she digs into her past to see the part she has played in her own unhappiness, a courageous move.

A retired California civil service worker in her early sixties, Rice discovers she needs a year “to get my shit together.” She aims to “crack the code of living my life in the now” to make “peace with the past and embrace the present.”

Early in the book, her sister challenges her to stop coloring her hair, a loaded request considering that when Rice tried this years ago, she was mistaken for her sister’s mother. In the spirit of personal rebirth, Rice accepts the challenge, and the author’s gorgeously thick, gray hair becomes the central image of the book. Throughout her ups and downs—both in spirit and weight—her hair bolsters her. It is the one thing she allows herself to love about herself, even as she admits to a debilitating sugar addiction, a long relationship with a sexual predator, an abusive first marriage, and ongoing struggles with yo-yo dieting.

Rice is upfront about her food addiction. “I routinely eat myself sick,” she admits. “I claim to fear migraines more than anything, and when I’m in the grip of one, I vow never again. Yet I forget . . . . or rather, I don’t forget; I’m overcome with sugar lust.” The scene in which she loses her battle with a bag of Halloween candy reads like the description of a junkie shooting up. The power of the scene comes in part from the book’s structure; Rice lets readers witness the first binge early, and we dread the inevitable recurrence. We know, as she does, that the sugar will not only sabotage her weight loss, it’ll also make her violently ill.

The (non)relationship with Ron continued intermittently for two years. Never gratuitous or self-pitying, Rice’s descriptions of these encounters are riveting, as is her honesty about her own confusion:

It’s hard to understand why I kept seeing Ron, why I didn’t stop. I do know that even as I came when he called and did what he asked, I desperately wanted a real boyfriend. I knew that what I did with him was nothing to be proud of. I didn’t tell anyone about it. I didn’t even like to think about it. Nor did I enjoy it or look forward to the next time. . . . It was never about me, or even about sex, but rather power, control, domination. I didn’t get this intellectually, but I knew it in my bones. I’d surrendered free will.

What sets Gray is the New Black apart from other self-reckoning memoirs is the author’s willingness to take responsibility for her own self-delusion. She’s openly curious about why she clung to these false truths about Ron. In a similar way, Rice investigates the stalemate in her marriage to Bob, and here the reader sees change unfolding.

A retired engineer, Rice’s husband is a “literal kind of guy” and more than a little dense when it comes to speaking his feelings. The author baits him repeatedly, trying to get him to say what she wants, a test he fails repeatedly. I “batted my lashes and hunched my shoulders so my breasts pressed together,” then she asked, “Do you think I’m beautiful?”

Though he fails in the compliment department, he loves her. He tells so all the time. And Rice loves him. She admits that she can’t be angry; she has gained weight, knows she doesn’t look her best. By the book’s end, after a year spent excavating shame and a trip to a Utah fat farm, Rice faces herself:

I have waited all my life for a man to say the prescribed magic words to me, to perform the prescribed grand gestures. .  .  . I have felt cheated out of my due of Lifetime movie moments.

Understanding that this cycle of dissatisfaction is based on fairytales, she asks herself:  Are these good enough reasons “to hold my husband at arm’s length until he utters the magic words?” No, she concludes:

It’s time to look at what I’ve been pining for all my life and ask if that’s still it, do I need that anymore, or am I a bigger girl now? Does my piano have more than one insistent sour note to plink?

With incisive, lyrical prose, Dorothy Rice articulates a longing for a generation of women seeking an honest way to see themselves, a way to authentically exist in the world. Her tunneling investigation into why it was once so important to fit in, to be wanted by a man, even the wrong man, feels essential. Even if Rice doesn’t give readers solid answers, it doesn’t mean they should stop asking the questions.
__

Christy Stillwell is the winner of the 2017 Elixir Press Fiction Award, a finalist in the Glimmer Train Short Story Contest, a Pushcart Prize nominee, and the recipient of a Wyoming Arts Council Literary Fellowship. She is the author of The Wolf Tone (2019 Elixir Press) and the poetry chapbook, Amnesia (2008 Finishing Line Press). She lives in Montana.

You are currently reading A Review of Dorothy Rice’s Gray Is the New Black at BREVITY's Nonfiction Blog.