A Review of Adriana Páramo’s Unsent Letters to My Mother 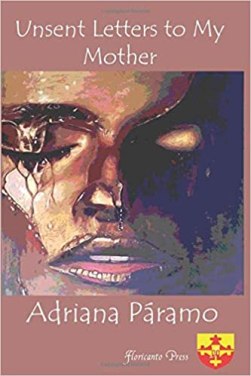 In the interest of full disclosure, I consider Adriana Páramo a mentor and friend, who I met as a student while attending the MFA program at Fairfield University. Now that this is out of the way, I must admit that her most recent memoir, Unsent Letters to My Mother, has been one of the few quarantine gifts I’ve received while bound to my home. Like Páramo’s previous books, My Mother’s Funeral and Looking for Esperanza, I identified with the underlying feminist themes, how the sentences are cloaked with a sensual tone, and the way facets of home are continuously explored. All of this, of course, has some Spanish sprinkled in to remind us where the writer hails from.

Páramo, born in Colombia, begins her story in the mid-1990s as she and her husband depart from Alaska to Kuwait. We follow her journey in a stifling hot country, as she struggles to fit in among the American and British expats, and falls in love with a man who isn’t her husband. Every few chapters a letter is addressed to her mother, confessional in tone, which demonstrates how the narrator reconciles the woman she has become with the woman her mother would like her to be. She writes, “Mami, please don’t judge,” the inherent message those of us have aimed for right before ripping up a revelatory letter to our parents. Maybe some of us hide these letters in a cabinet drawer, a firecracker that will only detonate when read by its recipient, but Páramo inserts them throughout her explosive book while allowing us to remain invested in all facets of the story.

Although the memoir details the disintegration of a marriage, an affair, killing cats, becoming a DJ and a teacher, plus much more, the different threads of the story come together to create one whole and complete canvas. The braided chapters ground the memoir in an exquisite way, and due to the writer’s background in anthropology, the interactions with the women she meets shine and provide intriguing cross-cultural perspectives. There are vivid descriptions of Elena, the English woman whose voice confounds a nation; the feisty and domineering teenage Salma; and the withdrawn Rina, who gives up all she knows in India in search of a better life in Kuwait. Each has to face the challenges of a country founded on patriarchy, where the extreme levels of wealth are contrasted with modern slavery and discussions of honor killings. Páramo recounts their poignant stories, even the devastating event when she finds her maid close to death from a back-alley abortion, and acknowledges how her definition of injustice isn’t universal.

What captivates me most is the narrator’s search for home. Much like Páramo, I left my birth country in South America to work and study in faraway places. I’ve often asked myself, in a city much different from the one I took my first breath in, “Is this my home or just a place I’m living in right now?” Páramo writes:

The word “home” resonated with all its accommodating possibilities: noun, adverb, adjective, verb, but its linguistic elasticity gave me no comfort. Alaska was never home for me, Kuwait was definitely not home, I no longer had a home in Colombia. I was homeless. Sin hogar.

The narrator sees all facets of home collapse. Her life unfurls, and she is faced with grave choices that will shatter some homes but will go on to shape her own.

In this book, Páramo does what many are afraid to do—bare the truth—without embellishing or demanding an exculpation: “I knew that every encounter with my lover was a simple act of pure thievery, that I was stealing time from his wife, from Hunter, from the lives we were committed to.” She delves into her affair with sharp candor while juxtaposing it within the sociocultural backdrop of a country where her actions beget more than mere gossip. Somehow, she does all of this incisively, while weaving in the lives of women who become her sisters. Unsent Letters to My Mother is a memoir with profound layers, but most of all, it’s a love letter addressed to anyone who has had to decide how to lead their most genuine life while eschewing the judgment of others.
___

Victoria Buitron is a translator and writer based in Connecticut. Her work has appeared or is forthcoming in Entropy, The Bare Life Review, Brevity Blog and more. Find her on Twitter @kikitraveler30.

You are currently reading A Review of Adriana Páramo’s Unsent Letters to My Mother at BREVITY's Nonfiction Blog.