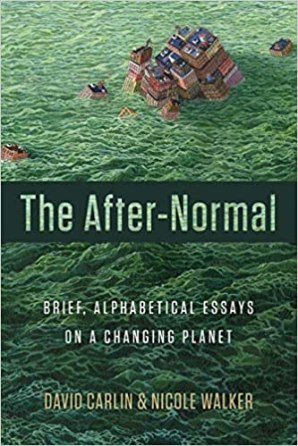 The After-Normal: Brief, Alphabetical Essays on a Changing Planet is a perfect book to read right now.

But I’m not sure when “now” is for you, dear reader. I am, however, sure it is in the After-Normal. The after-normal is a time of “seasons mutating, oceans acidifying … icecaps melting … brush fires burning hotter, faster, larger …” It’s a time when “what we assumed, like our parents, and their parents before them, was ‘normal’—being part of the rhythmic cycles of slow-moving evolution—will never again, in a geological time span of 100,000 years, return.” This is heavy stuff. And this book wants to address our reactions to it: What do we think? How does it feel? What do we do?

COVID-19 has changed the After-Normal but it’s still an After-Normal. As I write this, I’ve been quarantining for more than two months. With my spouse and nine-year-old twins. In a two-bedroom city apartment that feels smaller every day. We are lucky and grateful to be healthy.  But money is tight and the future—our future—uncertain. It’s difficult to think about the larger future—not just ours but everyone’s, not just in our lifetimes but our planet’s.

David Carlin and Nicole Walker can help us. They have written a book of “flash essays, in parallel with each other, one for each of the twenty-six letters of the Latin alphabet… [co-opting] the form of an A-Z ‘how to guide.’”  They begin with albatross and bacteria and canal, and end with xeric, you, and Z.

Essays in this book range from five pages to one sentence, their titles from “Bitumen” to “Hesitation,” from “Embroidery” to “Frog” from “Xoxoxoxoxo” to “Death.” But they all in some way confront or address the After-Normal, sometimes with sadness, sometimes with humor, often with joy.

For those of you who like riffs, tangents, and free association, you will love this book. Same if you like the short essays in Knausgaard’s Autumn, Heidi Julavitz’s The Folded Clock, Ross Gay’s The Book of Delights or, ahem, Brevity. Same if you, too, wonder what to do in this uncertain but always After-Normal.

Going back to the idea of riffing, an essay like “Catastrophe” starts with etymology, jumps to various cats (including the cat in Jonathan Franzen’s Purity), move to dogs, spikes out to Hart Crane, returns to etymology, then cat treats, then dog treats, and ends with the world on fire, “burning with clouds of red cardinals.” It’s like being a pinball in the game of someone else’s mind, bouncing between associations as the meaning of the essay builds. In some ways the whole book is like this—ever changing in subject, ever shifting in mood, but always illuminating some aspect of the After-Normal.

Here are some of my favorite passages:

From “Junk”: “Whalers called the melon of a butchered sperm whale ‘junk.’ This melon/junk, a mass of fatty tissue adjacent to the largest brain on Earth, was so named as it was the part of a whale’s head more or less useless for extracting sperm oil. For the whale the junk is not-junk .…”

From “Later”: “Maybe the problem is that we’ve never before had such power, as a species, both to predict and to affect the future.”

From “Loophole”: “Loopholes aren’t the soft things in fabric or in paper. They aren’t accidents but purposes. The word comes from the slits built into castle walls where soldiers could remain protected .… Loopholes are hard things, hard as night, hard as sleep, hard as children sleeping on hard floors .…”

From “Quarrel/Quarantine”: “Two things that can’t be isolated: love and change.”

Just because the world as we know it is ending, Carlin and Walker claim, doesn’t mean we can’t enrich ourselves with long flights to see old friends, with whiskey, with pancetta, with a crab sandwich. The “bad” must be balanced with the “good”—so much so that I feel the need to put quotes around each.

(“Krab” contains the recipe for said crab sandwich, by the way. And not krab with a k. “If your objective in life is to die happy, spend the big bucks on real crab.”)

Lots of things can make us happy, and many are explored in these essays—growing your own fruit trees, following internet rabbit-holes, writing with a fountain pen, writing to governors, eating sardines from a can, reading letters that traveled half a world to get to you.

My favorite thing about this book is that it can be read so many ways. Straight through or skipping around. As a prescription or as a hall pass. For fun or in earnest. But why these binaries? These essays can be read both ways at once.

Nicole and David got the idea for this book while walking on a beach near David’s home in Melbourne, Australia. They “talked about the trouble with environmental writing—how some of it can be so depressing, humorless, shaming, guilt-ridden,” how it separates “Nature” from culture, and how that “separation is a symptom of the problem.” They agreed to write a book that “moved beyond useless despair, feel-good guilt, or callous denial. Toward noticing, and witnessing … to respond, with care and love and justice.” This conversation evolved into the conversation of the essays in this book

One way this book resonates in this new stage of pandemic After-Normal is that it brings the far-flung up close—Arizona if you’re in Australia, Australia if you’re in Arizona, both if you’re in England or New England or Argentina or the Arctic. It looks into igloos, gets microscopic with bacteria, pans back to show the Earth from the exosphere.

Personally, I’m finding it deeply pleasurable to travel so far from the confines of my own quarantined home.

Quite another thing is the challenges that these essays present—to be conscious of our peccadilloes and our privileges, our crimes against the environment as well as our efforts—however individual, however small—to save it.

Reading this now I feel the balancing act all too acutely. I have to get out of the house but I’ll wear a mask while I walk … unless there’s no one around (early in the morning, later in the evening) in which case I’ll peel it carefully from my ears, the feeling of fresh air on my face something I didn’t know I took for granted until now, on this deserted side street, the smell of wet leaves and soil and peonies more delicious than ever before. I’m trying to be responsible while still taking small pleasures where I can find them.

So maybe that’s the lesson in The After-Normal as well as whatever version of the After-Normal we’re currently living in—know the rules, know what hurts others and can be helped, know what hurts others but can’t be helped; try to follow these practices, the order of the alphabet, even if it’s not as easy ABC 123.  Because either way it’s you and me—and the other 7.8 billion people on the planet.

(This review also follows the alphabet, starting with A for After-Normal and ending with – well – you’ll see.)

Underneath the somewhat rigid form of the abecedarium, however, are David and Nicole’s essays, each flexible and capacious (however short they may be).  And the combination is both powerful and pleasurable – especially when it’s these two writers in conversation.

Voice can be a tricky thing in a collaborative work. But Carlin’s and Walker’s voices are both similar but distinct, compatible but individual. Once you read through, say, G, you can tell who’s who but by then it only matters if you want it too. Instead of competitive tennis, it’s a happy volley. I was thinking about this (thwack), what do you think about that (phut)?

(Who knew there was a name for the sound a tennis ball makes? Phut. So many new things learned from and through this book.)

X, however, is always tricky. Other than the overused x-ray, what starts with x? The After-Normal has taught me yet another new word: xeric: characterized by a scanty amount of moisture. Having enough water is a concern in the world, certainly in Australia and Arizona, where David and Nicole are from, and this essay reminds us that “[n]ot enough moisture leads to friction.”

Yet friction is not always a bad thing. David’s essay “Xeric” reminds us that “[t]his is the time in which the friction caused by the urgency of what we face makes new ideas and new alliances suddenly thinkable and malleable.” What new thinking about health and patriotism and racism and entitlement and compassion and community will come from this pandemic, our newest iteration of the After-Normal? What new beginning will come from our old beginning’s end?

Z is the end, the last letter. And, like X, it’s also a hard letter to start a sentence with. Especially a sentence that starts the last paragraph of a book review. But here goes: Because of its stimulating qualities, The After-Normal helps me think. But because of its reassurances, these essays also allow me to sleep at night. And that good night’s sleep – Zzzzz – allows me to wake up to another day in the After-Normal, ready to face whatever this ever-changing world might bring.
___

Randon Billings Noble is an essayist. Her collection Be with Me Always was published by the University of Nebraska Press in 2019, and her lyric essay chapbook Devotional was published by Red Bird in 2017. Other work has appeared in the Modern Love column of The New York Times, Brevity, Creative Nonfiction, and elsewhere. Currently she is the founding editor of the online literary magazine After the Art as well as the editor of an anthology of lyric essays forthcoming from Nebraska in 2021.

You are currently reading A Review of David Carlin and Nicole Walker’s The After-Normal at BREVITY's Nonfiction Blog.