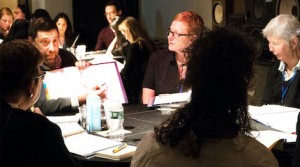 Writing conferences can be kind of daunting. I spent about half a decade going to various conferences across the Eastern seaboard as an eager attendee, relishing my 2.5 minutes of facetime with editors and agents, and awkwardly trying to start conversations with writers because we had one thing for sure in common—we were both writers. Whether it was a conference for book-length projects or just slinging essays about tattoos or poor choices made as a teenager, I felt like my success as a writer would be won or lost in the hallowed halls of a generic hotel-turned-conference-space.

But it got to the point when I started to feel like they just weren’t doing it anymore. Those 2.5 minutes didn’t amount to success, and it seemed like they were all blending together into the same experiences. Fortunately, I found myself eventually in a position to make a difference. As the Director of Conferences and Contests at Gotham Writers, I wanted to make a conference that could make a difference. Only I wasn’t exactly sure how, only that I knew what I wanted from a conference, and assumed others would want the same.

So I reached out to the people that attract writers to conferences—agents and editors. And I asked them what they would want to see from a conference. My logic was if we could make the “talent” happy, we could make the attendees happy as well. After all, you can only see so many panels before they start to repeat. I know I’m not alone when I say that I attended conferences with the hopes of making a connection to further my writing endeavors.

Their response surprised me—they hated conferences. Many saw them as a “rite of passage” for newer agents and editors, to get their feet wet in the industry. They highlighted any number of things that writing conferences did that drove them crazy and begging for the end of the day. So I asked them what would make that different, what would get them excited about a conference.

That got a better response. They didn’t want quick pitches, they wanted to educate. They wanted quality projects. They also wanted a decent lunch break.

Thus, the Gotham Writers Conference was born. A conference for book-length projects of nonfiction and fiction alike. Rather than speed dating 10 agents hoping to strike gold, we’re giving writers the chance to make a genuine connection. And, in turn, that allows us to line up some of the best agents in the business. We divide writers into “pitching roundtables” where they spend four hours with up to eight other writers in their genre, as well as two top agents in that genre. In that four hours, everyone will go over their first few pages and query letter or nonfiction book proposal. If it sparks a connection—great. We had writers land their agent in our first ever conference last year. But the goal here is to put writers in a better place after the conference so that they are better equipped to find an agent on their own.

With the individualized attention, writers leave their table knowing how to move themselves forward with their writing career, because there isn’t always going to be a conference there… as we are unfortunately learning in the times of COVID.
__

Josh Sippie is the Director of Conferences and Contests at Gotham Writers Workshop in New York City, where he also teaches. His work has appeared in The Guardian, The Writer Magazine, McSweeney’s Internet Tendency, Hobart, and more. When not writing, he can be found wondering why he isn’t writing. Twitter @sippenator101, more at joshsippie.com.