The Hands of a Writer 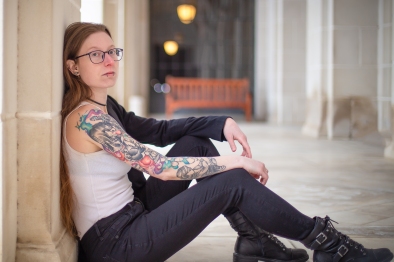 The arhythmic staccato of fingers typing fast and fluid on a keyboard has been one of the most comforting and consistent soundtracks of my life. I remember the satisfying clacks of my parents’ large mechanical keyboard, so loud the noise carried from the study all the way to my bedroom. Later, when my dad got an office job, I became intimately familiar with my mother’s typing, the short pauses that meant she was taking a drag off her cigarette, longer ones indicating she was focused on finding the right phrasing. Lately, when I visit her, I stay on the foldout bed in her office, and often read or take naps there while she’s working or answering emails, the familiar noise making me feel inexplicably, illogically safe.

Sometime in the late ‘90s, I had a computer game that taught touch-typing. I “played” it—to call such a dull educational program a game is potentially a misnomer—and gave up pretty quickly, only to try again a year or so later, and then again at some point. There was no good reason for me to learn this skill; my school rarely had us using computers, and it’s not as if I knew then that I would end up being a writer. I kept trying mostly out of envy: my best friend at the time, who was good at everything, had taught herself to, and my mother touch-typed, having learned on a typewriter years before.

I do touch-type now, having learned by trial and error and practice, but not the “right” way, the way that computer game wanted me to do it, using all five of my fingers in equal measure on each of my hands. I mostly use my forefingers, middle finger, very occasionally my ring fingers, and usually just my left thumb on the space bar. But I type fast, and—a fun party trick—I can look away from my screen entirely, at the window, say, or at my partner who’s walked into the room to tell me something, or at a friend sitting across from me at the library or coffee shop (back when we could gather to study and work together, that is), and keep typing out this full sentence without making even a single mistake.

Mirrors and I don’t always get along; they trouble me, or I them, and anyway, somewhere between the refraction of light on glass and silver and my brain processing the information given to my eyes, something is distorted. This is a symptom of my body dysmorphia, a condition that has stayed with me since whenever it developed during the long, messy years of an eating disorder I still cannot quite shake.

But my hands—I didn’t fall in love with them all at once, but bit by bit, as with a best friend who has always been there but who begins, one day, to seem appealing in a new way. It was in college that I first took notice of them, maybe because my friends kept complaining about how loudly I typed, and I wanted to see what I was doing to make so much more noise than they did. Or maybe, having a laptop for the first time, the screen and keyboard connected, my eyes were more naturally down to my hands’ movements.

Whatever the reason, I found myself enamored of my hands’ determined strength, noticing how my long, slender fingers moved with a spidery grace along the keys, the tendons on the backs of my hands arching up at unexpected moments. I became mesmerized with how my left thumb rested on its side when I was thinking, its knuckle a little swollen, and how the bony knob at the edge of my wrist seemed to shift ever so slightly when my middle finger tapped at the Backspace key. I even appreciated my translucent skin for once—normally I hate it, so see-through that vast expanses of me aren’t beige or pink but sickeningly reminiscent of hanging meat, squiggles of red, purple, and blue—and took pleasure in the three strong blue veins that disappeared between the knuckles of my right hand while, on my left, I could track one from the edge of my wrist, snaking up near my thumb, and disappearing into my pointer finger.

Three years ago, I started writing a novel, the seventh I completed, the fourth I sent to agents, the first that got picked up, sold, published. The editing process came amidst my fourth semester of graduate school and was so intense that I was left with immense pain in my right arm. I was diagnosed with tendinitis and have been doing physical therapy since—I tried cortisone shots, but once the second had no effect, I stopped—but fifteen months later, the pain hasn’t gone away. Dull or throbbing or lava hot or electrically searing, it lingers, and typing often and a lot makes it worse. I’ve tried braces, ice, heat, CBD cream, but ultimately, I likely need rest, the one thing I cannot get—I write for a living, after all.

I wish that were it, just (“just”) an acute work-related injury turning chronic due to overuse, but the truth is that my hands, the one area of my body I loved without reservation, have become sites of mourning. They’re changing shape, pinkies and pointer fingers crooking inward; pain flowering through the nerves and muscles for several days every month or so, often preceded by mornings when I wake up barely able to make a fist, hands stiff and weak. Whether early-onset osteoarthritis or seronegative rheumatoid arthritis—diagnosis pending due to pandemically postponed appointments—there’s not much to be done.

Which is worse? Depends on the day. I keep typing, hoping against hope that I will never need to stop, pushing through excruciating pain or ever-present discomfort, and try to take comfort in listening, at least, to the sounds of my fingers arrhythmically stacattoing their way through language.

Ilana Masad is a books and culture critic, host of The Other Stories podcast, and author of All My Mother’s Lovers.

Author photo by Joshua A. Redwine

§ 4 Responses to The Hands of a Writer

You are currently reading The Hands of a Writer at BREVITY's Nonfiction Blog.