A Review of Nadina LaSpina’s Such a Pretty Girl 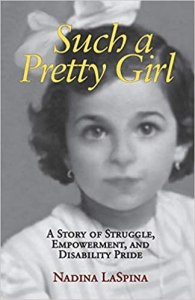 As I write this, we are living in a world dominated by a virus. Conversations are centered on who is most susceptible and what are the long-term effects. Media outlets tout commentary on the war we are fighting and who will come to the frontlines. We avoid close quarters and eye others with suspicion, wondering what is permeating inside. In the worst-case scenarios, the virus attacks a whole family. Grief can come in so many layers it is difficult to locate the core.

This is 2020. Yet it is also 1950. It is three years before my mother and aunt contract polio at the ages of five and eight. Throughout the United States, headlines inform families to be wary of swimming pools and to watch children closely. It is common to hear about isolation and quarantine. And in Sicily, Nadina LaSpina is only sixteen months old, a hearty and independent child, already walking on her own. Decades later, she writes: “I was never sick, never a fever until…until that fateful night when Crudele Poliomielite, Cruel Poliomyelitis, invaded our happy home and stole me from my family” (4).

Louise DeSalvo, memoirist, craft scholar, and my mentor, once said: “Memoirists are the collective memory of culture. This is why memoir is attacked. Culture trades in forgetfulness.” I return to this quote many times while reading LaSpina’s Such a Pretty Girl: A Story of Struggle, Empowerment, and Disability Pride. Throughout the memoir, LaSpina recalls the failures of the educational system to adapt to students with diverse physical needs, the many forms of stigmatization she experienced due to her use of braces and a wheelchair, and the enforced desire of cure or “normalcy.” As I read her work, I am struck by how it resonates, not only with my own mother’s experience with polio in the United States, but the current circumstances in which we exist. This is not the first time we’ve encountered a virus, and though there are certainly elements unique to the current moment, there is so much to be learned from the past.

Disability Studies scholar Tobin Siebers argued that the most successful forms of disability life writing utilize a “rhetoric of realism,” that reflects the complexity of disability. These are works that do not devolve into the overcoming narratives preferred by many in mainstream publishing, nor do they erase physical pain and grief. LaSpina has curated such a memoir, capturing her complex and shifting responses to her body and disability identity. Of becoming increasingly immersed in disability activism, she writes:

For years, I’d been—and indeed still was—terribly conflicted. I wanted to be around other disabled people, with whom I felt most comfortable, be part of our movement, and fight for our rights. At the same time, I wanted to be accepted in the nondisabled world; I didn’t want to be seen as different. (146).

This passage reflects the internalized ableism informed by an early life shaped by a father who desperately sought a cure or way to “fix” his daughter’s legs. Yet by the conclusion of the book, LaSpina narrates the tremendous pleasures she takes in her disabled community and activist groups. One of the several photographs included in the memoir capture LaSpina at a rally, her hair split down the middle, long dark hair blending into a winter coat, and holding a large protest sign. LaSpina recalls the evening of her first arrest, at an ADAPT protest, sitting in a jail cell and speaking “to each and every one of my strong comrades…shar[ing] stories of struggle and hopes for a better world” (237). Such moments solidify LaSpina as a leader amongst prominent disability advocates such as Judith Heumann and Laura Hershey. LaSpina adds: “The bond I developed with each one would last a lifetime” (237).

Like most successful memoirs about disability, Such a Pretty Girl complicates the narrative of “recovery.” LaSpina spends much of her early life trying to “pass” as nondisabled, using crutches and prosthetics to limit her use of a wheelchair. But by the 1980s, symptoms of post-polio begin to emerge, and a fellow activist tells her: “You need to stop walking and use your wheelchair. There’s only so much you can ask of your body” (157). With this, LaSpina navigates new frustrations, as well as new ways to move through the world, some of which provide greater ease. In this, LaSpina constructs a narrative of changing disability status, and documents shifts in the ways she gives and receive care.

When I teach courses in Disability Studies, many students identify an absence of disability history within previous coursework. Though most have heard of the ADA, they are unaware of all that went into and emerged from the law, as well as all that isn’t recognized by it. In this regard, Such a Pretty Girl takes on dual significance. It is not only a powerful memoir chronicling an individual woman’s immersion into disability culture and activism, but an important record of a vital and evolving rights movement.
___

Jessie Male is a nonfiction writer and PhD candidate in Disability Studies at The Ohio State University, though she resides in Brooklyn with her husband and rescue dog. She has an MFA in memoir from Hunter College and an MA in English from Ohio State. Jessie’s creative writing appears in Guernica, Bustle, Vol. 1 Brooklyn, BOMB Magazine, and other print and online publications. Jessie is a 2011 Edward Albee fellow, which supported work on her memoir Mirror Pain. She is currently on faculty at NYU Gallatin, where she teaches a fall seminar on Disability Art and Culture, and a spring seminar on Disability Memoir. You can reach her @ProfJMale and jessiemale.com

You are currently reading A Review of Nadina LaSpina’s Such a Pretty Girl at BREVITY's Nonfiction Blog.