Finding Your Audience: Writing to the Younger Self

I had a dream I lived in a flat in Copenhagen, and outside my apartment, I kept my bicycle. Young women in flowery dresses constantly came up to my house to take pictures of themselves in front of my cute house, pretending to ride my cute bicycle. They wanted to post themselves on Instagram. In my dream, I was upset by all of these young women who were pretending to live my life.

When I woke up, I was back to being alone in my Dublin hotel room. I guessed that the dream was the intersection between the waking hours I had spent looking at hotels in Copenhagen and the streets of the Temple Bar below my window, filled with people, trying to get the perfect shot, proving to all their Instagram followers that they were, indeed, living their best lives. I wanted to live my best life, too, which was why I was researching a quick weekend trip to Copenhagen after teaching in Ireland, but I had too much work to do, so I ended up staying put in Dublin until my flight home. I had also gone to bed thinking about an email an editor sent me, asking me who the reader for my next book is.

I realized the women snapping selfies with my Danish dream bicycle are my readers. Women who are trying to be more adventurous, but sometimes doing inappropriate things in the process, are the audience for my forthcoming book of travel essays, not ironically called Bad Tourist.

I know saying “my audience is a girl in a flowered dress with a selfie stick” might sound ludicrous to book-marketing professionals. But we all know this girl, don’t we? She has been to college, and she posts pictures of smart books (she swears she means to read) on her Instagram feed. She isn’t entirely sure what she wants to do with her life, but she dreams of traveling the world. Mostly, she feels like the awkward teenager she once was, craving the attention of the wrong boys and then men; she wants to feel less alone. When people like and leave heart emojis on the pictures she posts of herself, it makes her feel good. She wants people to like her. Her name might be Lauren or Becca or Hannah. Or Suzanne—the younger version of myself, the me who dreamed of someday becoming older me, a travel writer with a passport full of stamps. 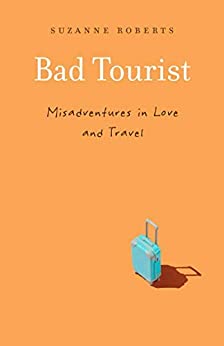 Bad Tourist: Misadventures in Love and Travel is about how I try not to be a bad tourist but so often fail. Would my younger self be okay that my older self is telling all of her secrets? She felt so much shame over those transgressions. I want to reach back and tell her it’s all going to be okay, and maybe that’s why I’m writing memoir to begin with—it’s a letter to my younger self.

When I was working on my last memoir, a critic said how much he hated my narrator (me). He also said her humor was unseemly, which sounded so archaic it made me laugh between the tears. But then I realized that I hated my narrator, too, so Dr. Meanie Critic and I had this in common. My younger self complained too much. She was self-centered. I thought about giving up altogether, but something in me knew the even older self I would later become would not want the now-me to give up—sometimes the act of writing is a conversation with both the past and the future.

I called the mentor I’d had when I was the age of my young narrator. Al Landwehr had been my creative writing professor when I was 22, the age of the girl I was trying to write about. I asked him what to do. Al said, “You have to think of that younger self as a sort of daughter, someone who drives you crazy, but you still love her. You must remember to love her.”

And I do love her because even if no one else cares about my story, she would. She feels the same way I do; she would just look better in selfies, if there had been such a thing back then. She wants to travel the world and live her best life. She has no idea that there will be something called social media in the future, but she still spends too much time worrying about what others think of her. She wonders about the big questions, too. Is she making the world a better place or are her travels negatively impacting the world? Will anyone care what she has to say? Are her stories worth telling?

Al Landwehr always gave me sound advice, so I trusted him and held my younger self in my mind’s eye during revision, and I remembered to love her (even if she drove me crazy). It is in this way that I have written books for her (and for the young women of today who are like her: Lauren and Becca and Hannah). I hope they like my books, and they don’t mind that it’s late in the afternoon, and I’m still wearing my pajamas, revising a book rather than out exploring the rain-slicked streets, drinking a Smithwick’s, and listening to Irish music in a dark, crowded pub.

And even if sitting on my hotel bed with my laptop sounds boring to Lauren and Becca and Hannah, I know I am here, living my best life.

Bad Tourist: Misadventures in Love and Travel is available now, from University of Nebraska Press.

Suzanne Roberts is the author of the memoir Almost Somewhere: Twenty-Eight Days on the John Muir Trail (winner of the National Outdoor Book Award). Named “The Next Great Travel Writer” by National Geographic’s Traveler, her work has been listed as notable in Best American Essays and included in The Best Women’s Travel Writing. Her work has appeared in The New York Times, CNN, Creative Nonfiction, The Rumpus, River Teeth, and elsewhere. She holds a doctorate in literature and the environment from the University of Nevada-Reno and teaches for the low-residency MFA at Sierra Nevada University. Follow her on Instagram @suzanneroberts28.

§ 13 Responses to Finding Your Audience: Writing to the Younger Self

You are currently reading Finding Your Audience: Writing to the Younger Self at BREVITY's Nonfiction Blog.