Who Deserves the Truth?

When I was a circus aerialist, my act finished with a dramatic upside-down slide, dropping 16 feet head-downwards before catching in the aerial fabric, my skull inches from the ground. It was a crowd-pleaser, and it required more technique and timing than sheer strength, so it was a good trick for the end of a tiring show. The only problem was, the back of my knee was the “brakes.” Squeezing hard on the fabric with my upper calf kept me from concussion, but it also gave me rope-burn.

I did it anyway. It was the best trick I had, the one that made audiences clap and put money in the hat at the end of the show. The raw skin was usually worth it. But sometimes, when sticky humidity told me “this one’s gonna be bad,” I’d look at the audience and judge their enthusiasm, their involvement in the show so far, and think, Have they earned this? Do I want to give them this much?

I face the same challenge as a memoirist. When I break out a particularly intense story, or share deep vulnerability on the page, I go full out. But I temper my words in subsequent drafts, gauging how personal I want to be based on the readers I’m hoping for. That’s easy enough to do for an essay or an Instagram caption; I can start later in the story or end earlier, leave some details out, put some mitigating circumstances in. I have some control over how far the story goes, where I submit it, who will see it on which social media.

Adjusting memoir-pain tolerance is much harder for a book. The writing process lasts longer; the potential audience is bigger. Our relatives and friends may treat a book with more weight than a Facebook status.

I’ve had editorial clients ask, “Should I just make this a novel?”

Novels need complete dramatic arcs, compelling characters, and an ability to fully embrace new scenes or plot elements. “What actually happened” isn’t always believable as fiction. The more gripping the story, the less it may resemble your story.

For novelists, the craft of writing is as important as the story itself. Sure, some average writing makes the bestseller lists, but usually because the story has powerfully hooked the public. Novels based on the author’s experience draw from life, but approach the subject from another point of view, or with a better ending, or happening to different people. Write your novel because you want to write a novel, not to hide from your own story.

Memoirs are elevated by truth. Readers can forgive an arc that doesn’t quite resolve when they’re thinking about the real-person protagonist. Decent-to-good writing becomes gripping when you’re telling the truth. Plenty of memoirists are also incredible writers. Plenty of memoirs-in-progress are not yet excellent writing. How much time do you want to spend “becoming a great writer” versus “becoming a good writer, learning about myself, and getting my story into the world”?

I’ve had clients ask, “Could I use a pen name?”

Memoirs sell on topic and name recognition. The less recognizable you are, the more powerful your topic must be. If you’re writing about your week in Bin Laden’s bunker, or your high-class Manhattan escort days, or your Secret Service career, sure, use a pen name (and lawyer up!). But if you’re trying to avoid social fallout, don’t bother. You’d have to start establishing that fake person’s publication record and online presence now, and your family is going to find out eventually anyway. Why sacrifice your existing network to temporarily hide, while also sabotaging your ability to sell your own book?

Put the effort of re-visioning your life as fiction into cultivating positive relationships with your readers and your fellow writers. Skip building a fake person to promote this book—instead, build your own courage and your support network. Part of publishing memoir is standing up for your own story. If you’re not ready to share it as yourself, you probably aren’t ready to share it at all. Keep writing and publish later.

Writing good memoir hurts, because good memoir pokes old wounds. Publishing memoir means knowing ahead of time you’re going to inflict pain on yourself, and choosing to share your story anyway. The pain becomes a badge of power, a sign that silence doesn’t control your story. That you’re strong enough to tell. You trust your readers to listen. You give readers hope, you’re not the only one this happened to—one day, you’ll be strong enough to tell your story, too.

When I did my rope-burn aerial trick, sometimes the audience had earned it with their laughter and applause. Sometimes they hadn’t, and I ended with something less dramatic but without physical pain. But more times than not, I did the trick for me. Because I could. After about 4 years, the back of my leg scarred over. No more rope burn. I’d leaned into the pain so many times it couldn’t hurt me anymore. 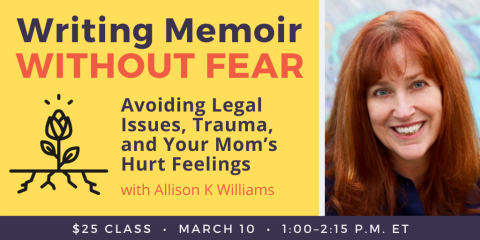 § 25 Responses to Who Deserves the Truth?

You are currently reading Who Deserves the Truth? at BREVITY's Nonfiction Blog.