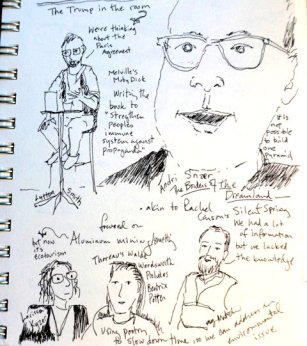 When I found out I’d be going to NonfictioNow 2017 in Reykjavik, I read The Sagas of Icelanders. How better to get to know a country than through its most treasured books? The Sagas feel like the ground from which all Icelandic literature grows. I loved seeing the pre-Christian landscape when magic still dwelled in the landscape itself. I loved how warriors would pause in battle to riff out a few lines of poetry. I loved the sentences unfettered by flowery words (like flowery). Yet, as when I read Kerouac’s On the Road, both times, I wondered why the women rarely spoke or did anything interesting.

I read the Sagas to introduce me to Iceland, but they also primed me for the conference. Not for having quiet Sagaian women. Quite the contrary, the conference had strong representation from women writers, thank goodness since women’s voices need to be heard. The Sagas tease at the edges of truth, or more precisely, reveal reality as a complex mix of magic, poetry, struggle, body and imagination. I found these same qualities, minus any head-splitting with battleaxes,  investigated in the panel sessions and readings at the conference. 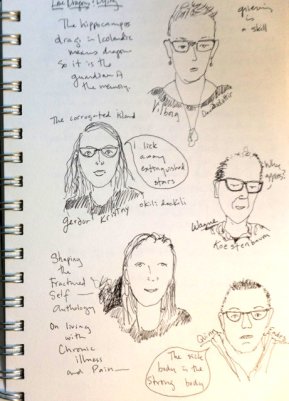 I feel more than ever that nonfiction is becoming alive. Facts used to feel like stone, like the things in life that never breathe, but the deeper I dig into what it means to tell the truth, the more I see that stories sing with facts. The conference also made it clear that the people writing nonfiction today are explorers travelling the far reaches of what can be done on the page.

This is my third NonfictioNow conference, so I can sense an evolution and notice a continued blurring of boundaries and breaking down of walls. The panels and readings explored hybridity of form and genre, considered the body in and as story, revealed a diversity of voices and ways to tell true stories. They considered the physics of time.

I’m glad the NonfictioNow team brought the conference to Iceland. This is the first time it’s been held in a country whose mother tongue isn’t English. While all the panels and readings were in English, I had a chance to hear Icelandic writers read translations of their work. My favorite line of the conference came from Gerður Kristný—“I lick away extinguished stars” —during her reading from her true crime poetry, a story of murder narrated by the Devil. Sadly, the book is not available in English. And even if it were, it might not be sold in the United States (America first and all that). I don’t have much hope of ever mastering the Icelandic language enough to read Kristný or any of the other fine Icelandic authors, but I hope more translations are published in English. And that these books find their way to the States, perhaps hidden inside containers of Skyr. 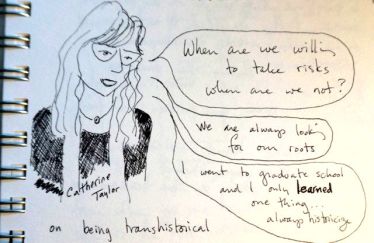 At the same reading, held in a small chapel-like room designed by Alvar Aalto, American writer Ariel Gore read from her upcoming book, We Were Witches, a magically real memoir-based novel. The passage she read offered a new direction for the genre that my daughter used to call nonfiction fiction. True-feeling stories that create a world where Adrienne Rich can be a bird chirping out advice from a tree. I want to live in that world of poet birds, a place where I’m certain magic still dwells in the landscape itself.

I attended or participated in sessions that addressed memoir, tackling issues of the dual perspective (pay attention to pace and question linearity), dark matter (draw cartoons), the segmented narrative (say yes to it), movement (leave home), and debt (die). The panel on time in memoir, chaired by Barrie Jean Borich, revealed what physicists have been saying for decades: time is like taffy, all churned up and delicious. Paul Lisicky spoke of queering time, the way the structure of his memoir demanded to be incremental, nonlinear, as his life had been lived. 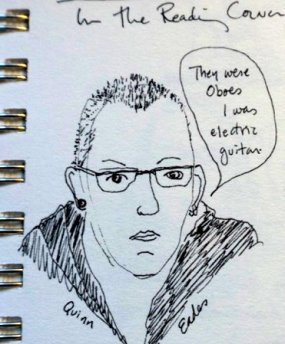 The last panel session of the conference fittingly focused on movement. All the panelist in this session have lived uprooted lives and discussed the effect their movement across the globe has had on their writing. Carmella de los Angeles Guiol began her talk with a quote from an essay on plants, on the benefits of having a perennial root system. Movement can generate writing though sometimes, as she noted, “I need to know where my socks are.” Glen Retief saw a benefit to memoir in having a “scrambled GPS.” He noted how it grants “the gift of perspective,” as well as stimulates linguistic and formal innovations. “The fragmentation of moving around a lot” can bring fragmentation to the memoir form.

A lasting takeaway for me was advice I heard during the Q and A for the session on Writing While Working Class, chaired by Sailor Holladay. To help other writers, especially those who struggle most to get their work published, Denise Benavides suggested you “don’t be a fucking gatekeeper.”
___

Rebecca Fish Ewan is a poet/cartoonist who makes and publishes Tiny Joys & GRAPH(feeties) zines through her own imprint, Plankton Press. Her work has also been published in Brevity, Landscape Architecture and Hip Mama, Survivor Zine and in her nonfiction book, A Land Between. She teaches at Arizona State University. Find her on Twitter/Instagram: @rfishewan. Rebecca also provided the illustrations for this blog post.