How I Found My Voice (at my day job) 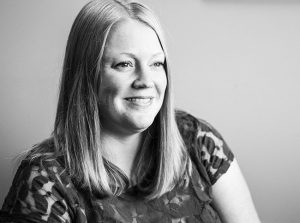 Every copywriter has an unfinished manuscript tucked in a desk drawer, goes an old advertising cliche. The manuscript represents an identity crisis, a fraught relationship between commerce and art.

“You know the popular conception,” a 1960 New York Herald Tribune article summarized. “He’s writing about Frabjous Krispies for his pocketbook but here are tears in his beard.”

I, too, am a copywriter with a manuscript. And until a few months ago, I too had an identity crisis. But mine wasn’t a struggle between art and commerce. I just couldn’t find my voice.

The Story I Almost Couldn’t Tell

My book is rooted in family history: my great-grandmother might have belonged to a Satanic cult. I’d overheard bits and pieces of the story throughout childhood: She’d always been a bitter woman; then she fell in with a strange crowd. People began disappearing. And the dirt floor of her cellar, well, that was a perfect place to hide bodies.

No one had substantiated the family rumors. After I became a mother, I decided to try, and write a book about my investigation. I interviewed family members, and jotted down drafts. I spent my lunch hours at the ad agency searching digitized newspaper archives for clues. I envisioned the finished book to be a literary look at family secrets. But I couldn’t untangle the narrative threads: The fallibility of memory. The true crime angle. Genealogy. Satan.

How could I capitalize on the occult angle without sensationalizing it? Was I writing a history book, a memoir or—Satan forbid—a piece of pulp?

I struggled with these questions for nearly a year. I studied the Hero’s Journey and mapped out each chapter. This tightened up the book’s story arc, but left me no closer to understanding its nuances. Discouraged, I began spending my down time gossiping with coworkers and stalking the employee breakroom for snacks.

That’s how I found my solution. I’d wandered into the breakroom for a third cup of coffee one afternoon when I overheard a coworker explaining brand pyramids to an intern.

“All great brands are built upon something universal,” he said. “That’s what makes them relatable. The trick is to capture something universal and remain true to the things that make the brand unique. Those unique parts sit at the top. They’re what everyone sees. But that universal part provides the foundation.”

Universal yet unique, I thought. Huh.

That evening I sat down and listed my book’s narrative threads. Then I began organizing them into a pyramid of my own, from the most universal to the most unique. How did brain science fit in? Where did genealogy go? I crossed out threads and added new ones. Eventually a structure started to form.

Family was the foundation of my story; the most universal of all the angles. Next came motherhood, which had sparked my investigation—also universal, though a little more focused. Mental illness was a third theme—not quite universal, though all-too common. I’ve struggled with OCD my entire life, and suspected this or some other mental illness played a role in my great-grandmother’s behavior.

And finally, that weird little detail about the occult. The part that everyone noticed, and everyone remembered.

Calling this a brand pyramid isn’t quite accurate. It’s just an organized list of narrative themes. But once I’d created it, writing my book became easier. Talking about it seemed more natural. I felt like I’d finally found my voice. 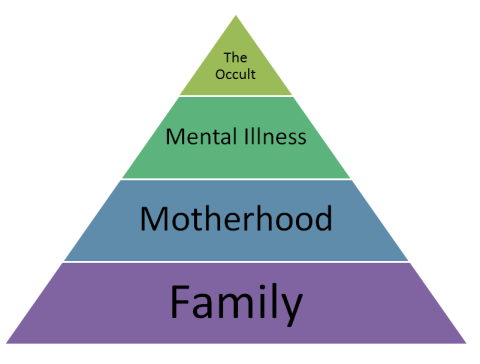 Finding Your Own Voice

I’ve always been interested in a long list of strange and disparate things. Perhaps that’s why I like advertising: I get paid to write about candy bars and extrusion machines, all in the same afternoon.

Rather than confining me to a narrow set of topics, this pyramid has empowered me. I no longer feel obligated to insert an occult angle into every blog post I write. I’ve opened up about my personal experiences with motherhood and mental illness, because I finally understand their relevance.

Most importantly, I get excited when I look at my brand pyramid, because I’m reminded of what drew me to this story in the first place. I notice connections between themes that I hadn’t seen before. But it took me a long time to get to this point. I spent many afternoons frowning at my computer, with too much to say and no way to say it.

If you find that it’s taking you a long time to find your voice, too, don’t panic. Explore everything that feels relevant, and a few things that don’t. Keep evaluating and re-evaluating which angles feel right, and which topics draw your interest. Ask yourself: which parts of my story are universal, and which are specific to me alone?

Your direction might take the form of pyramid like mine, or a mission statement, or a mind map. Maybe it will look like something else altogether. In the end, the form doesn’t matter; only that it leads you down the path to your best work. Even if your best work turns out to be about Frabjous Krispies.

Kelly Kautz is a writer and content strategist with work in Salon, Forbes, and MSN.com. She is at work on her first book. Find her on Twitter @kellykautz.

You are currently browsing entries tagged with pyramid at BREVITY's Nonfiction Blog.