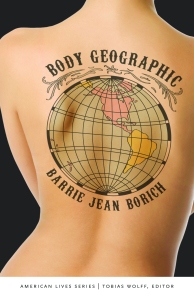 Midway through the writing of my memoir-essay hybrid Body Geographic (University of Nebraska Press/ American Lives Series 2013) I became obsessed with maps, so much so that I came to consider my book a variety of map art—my own quirky attempt at counter-mapping my American body against the “true and accurate atlas” any woman of my place and generation was supposed to follow. Yet this project did not begin in the literal form of an atlas. Rather this writing began as fragmented essays about the intersections of place and the body, most particularly the juncture of my body and the far southside Calumet Region of Chicago inhabited by both sides of my family for as long as they have been Americans.

Maps don’t solve the mystery of why environment and human longing are so intricately intertwined, but something of the way maps bring together embodied landscape, documentary inquiry and artistic subjectivity has worked to enhance, and make corporeal, my understanding of all my places. Similarly, the act of lyric and narrative mapping brings me closer to an understanding familiar to any personal essayist or memoirist, which is that renderings of the self are no more than attempts or—as critical cartographer and map artist Denis Wood describes maps—propositions. The best we can do as literary artists is map in a manner that embodies the invisible beauty of spatial comprehension. The four-minute slide show below is an “atlas” of the maps, map-like images and quotations I included in Body Geographic, along with the captions I wrote to both contextualize the images and cast them as another kind of essay, woven through the length of the book.