A guest craft essay by Paul Zakrzewski on narrative drive in the segmented memoir: 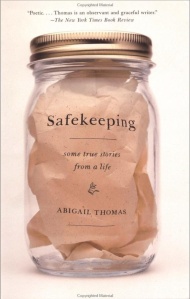 Recently, I found myself re-reading Abigail Thomas’s Safekeeping, a fabulous memoir-in-fragments about marriage and motherhood. And once again, I’m struck by a contradiction at the heart of the book:

How does the author create such narrative drive, such a fully realized portrait of a life, in a memoir whose form would appear to undercut these achievements?

Even if you don’t know Abigail Thomas’s memoir, it’s likely — especially if you’ve gotten an MFA in the past – you’ve heard it name-check. It’s one of those more experimental books, like Joan Wickersham’s The Suicide Index, which make the rounds in CNF courses. You know, the ones advisers push on you during conferences. The ones your classmates urge you to read in their manuscript margin notes.

The book is comprised of dozens of short sections—some four or five pages, others as brief as a single sentence. And while characters and motifs reoccur, each vignette is self-contained, so that at first glance the book looks more like a collection of prose poems. A disjointed one at that, with jumbled chronology, so there’s often years, sometimes decades, between sections.

Then there’s the narrator herself, frequently switching between past and present tense, or between first- and third-person.

With all that lack of connective tissue, all that shifting of tenses and point-of-view, you’d expect the narrative flow to be constantly disrupted.

Quite the opposite, though. Both times I’ve picked it up, the experience of reading Safekeeping has been the same: the gaps fall away, much the same way as clacks on a speeding train smooth themselves out.

How does Thomas accomplish this?

In at least four ways:

When I began writing Safekeeping, which is, for lack of a better word, a sort of memoir, I had no idea in hell what I was doing, all I knew was I couldn’t stop. What were these little pieces I was feverishly scribbling? They had started coming a few weeks after an old friend died, a man I’d been married to once upon a time, someone I’d known half my life. The pages piled up.

The power of that grief is what pulls things together, giving the book its emotional stake, its sense of urgency.

In The Situation and the Story, Vivian Gornick describes how great memoirs feature a “truth-telling” narrator. We trust the voices of writers like George Orwell or J. R. Ackerley or Annie Dillard because they seem so honest and self-aware. Thomas’s is one of these.

…She looks at her watch. Two-thirty in the morning. She is tired, but nothing is wasted, she uses it to remember the old days. Exhaustion is her servant, where once it was her master. She looks out her window, uptown, at the water towers, at the squares of light in other windows. Where a man she hadn’t met back then, a man she was about to meet, a man whom she would love and hate and love again, a man with whom she would spend the next thirty years, give or take, has died. Died. It seems impossible. She can almost see his windows from her window. She can almost hear his voice. Anything might happen. She doesn’t want to go to bed.

Apart from some breathtaking lines (“Exhaustion is her servant, where once it was her master”), notice how Thomas weaves reflection in and out of specific moments. It’s nearly seamless.

It was at a party in what was to become SoHo, lots of drinking, lots of smoke, and somebody said something I didn’t catch, and another man replied, one hand on the back of his own head, the other holding a cigarette, both men wearing togas as I recall, ‘Oh honey, any sense of security is a false sense of security.” Everybody laughed, but I didn’t get it. I just didn’t get it. What was so funny? What did it mean?

Notice how that long sentence at the beginning pushes forward, not just setting the scene but filling in telling details, growing more specific as it tumbles along. That, along with the repetition in the final sentences, sets us up for the narrator’s epiphany.

Thomas is also a master at conveying the multiplicity of time. Phrases like “…where a man she hadn’t met yet” and “what was to become Soho” create a bumping, vertiginous, cinematic rush. Even as we’re pinned to the here and now, memory reaches across many other moments in time.

Thematic control, a truth-telling persona, the effective use of reflection, strong endings. These elements are the building blocks of good memoir writing. Haven’t I been studying and reading about each of these for years? In countless workshops?

I just didn’t get it while I was reading Safekeeping the first time. I mean, I noticed some of these, but I was much more transfixed by the book’s unusual form.

Paul Zakrzewski is a writer and teacher based in Santa Barbara, CA. He recently completed his MFA in Creative Nonfiction at Vermont College of Fine Arts. Find out more about his SoCal writing workshops at http://www.pzak.net/workshops.