The Power of Failure in Memoir 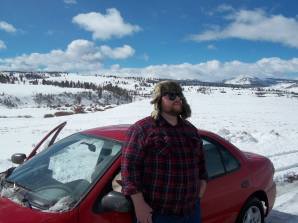 Recently I have been translating a book of poetry by the inimitable Antonio Gamoneda. I was nervous when I began, having never attempted any kind of literary translation before. During, I am enveloped in the engaging challenges, the uncommon nuances, the wordplay. And after? I am obsessed with each small failure. I can’t stop thinking about my choices:

Was I right to lean towards meaning over rhythm? I don’t think I got the diction right. I never did get all the connotations of “mosto” in there. Was it okay to translate “ácido prúsico” as “DDT”? Or “Una mentira luminosa” as “a neon lie”? Am I erasing the culture of the original? I kept Spanish in my translation—Will an English reader know that “madre” means “mother”? Will they be able to translate “dulzura” from context as a term of endearment?

These, to me, aren’t just empty obsessions. I am trying to carry the meaning to a new audience across a long distance. I am making trips back and forth, each time with a bit of water in my hands, and almost all the water keeps slipping through my fingers. My failure matters not just because I owe it to Gamoneda to get his words right. It also matters because I want to give the reader the same experience I had when I read his poems for the first time.

Of course, translating my experience for a new reader is equally impossible. But I want readers to experience what I have, to truly understand something about me, in the same way that I strive to know others. But, if I go by this high standard, then I must admit—I have never even begun to tell such a truth in an essay.

I’m not talking about lying. I’m not even talking about the inevitable hiccups of memory, or the limited space on the page, or the purposeful selection and ignoring of sensory details, people, or motivations. I’m talking about translating experience into words, life into story. I’m talking about trying to write an accurate representation of the nuances of who I was, what I was thinking about, what I believed in, what I experienced, and everything else about me, my life, and my situation that bled into the moment I’m writing about. I’m talking about inexplicable differences in biology, experiences, and environments, how language can never account for these things.

After all, I can never explain my behavior, what I ever wanted or believed. Words can only be shadowy placeholders for my real-life experience. Like when I tried to translate mosto from Spanish into English—so much gets lost in translation. Attempting to explain the nuances of what this single word means (not just in Spanish, but also what it means to me, what it meant to the author) to anyone else would eat up this whole page and still fail. Each word we put down gets somewhere near the mark, but never exactly hits it. And each little failure adds up and up and up until we are left with a final product where our failures tower over us. Where we finally start to realize the depth and breadth of what we have not accomplished, what we never will.

It’s like when I go hiking and camping in Colorado each summer. I take pictures of all the spots I love most. Places that shake through me like a thunder clap. But when I get home and look at the pictures, they’re almost unbearably two dimensional—they can’t possibly recreate that place. Even when using a wide-angle lens, or using a 360-degree feature that shows in precise detail exactly what is around me, I simply can’t make that mountain appear on the screen. No one will ever see the mountain I saw.

The picture can’t make the sky big enough, can’t make it arc over my head into infinity like the sky did for me. The picture can’t recreate the deep brown of the earth, the sharp sting of the white in my eyes. It can’t give you that inconceivable depth of silence or that smell of a hard winter melting. If you went to that exact same spot yourself, you couldn’t see it. I wouldn’t be able to see it if I went back—it would be a different mountain.

And more than that: the picture can’t tell you about my long, desperate, 18-hour drive to get to the foot of that mountain. The endless, lonely hours behind the wheel with only a vague destination. The questions running through my mind; what are you doing? Why don’t you pull over and sleep? Why isn’t anyone in the passenger seat? And a million other questions there aren’t words for. Neither the picture nor this description can hope to explain why I went there, what I was looking for, whether I found anything when I arrived. (And that’s only partially because I don’t understand it myself.)

A picture can’t reconstruct the awe I felt upon arrival. The immense gratitude, the overwhelming grief. It doesn’t show what I was experiencing behind the camera, where I was both wrecked and renewed, shattered and remade.

Instead of that recreation, that incredible, enormous truth, all I can do is produce more and more words that don’t do any of it justice.

Perhaps this is something most writers know instinctually. I might know it, too, but I have tried and tried and tried to narrow the gap. To find words that got me just a little bit closer to what it was like. But the constant collapse used to plague me. I think that this obsession might be madness, though. I think I must learn to embrace the gap. After all, as Christopher McCandless wrote in what were likely his last words, “happiness is only real when shared.” And I’m starting to think that maybe the happiness he was talking about wasn’t just about sharing company or common experience. I think that it might come from the imperfection of that sharing; our inability to ever have any common experiences; our happiness comes from our brave and continuous attempts to relate—to understand—in the face of inevitable and enormous inadequacy. I think that maybe a profound happiness is the result of our eternal failure in communicating or truly sharing our experience, even if we are all looking in the same direction.

Where my sharing fails, where everything I write and say falls short of the kind of communion and communication I seek, I must trust that my attempt, my essaying again into failure, will result in someone picking it up and filling in the gaps in ways they too could never articulate. Not even to me—not even to the person who gave them the broken words in the first place. I must trust that someone will lovingly take my failure and turn it into something that lives and breathes and, if I’m lucky, maybe even saves them in the same way that the mountain saved me.

But that’s not quite right either. What I’m trying and failing—again—to say is something like this: I don’t think the mountain saved me after all. I think I saved it. From no one making the effort to understand any part of it or grasp a piece of its immensity. From being trapped in two-dimensional photos, in half-concealed symbols, in inept approximations. And I think it’s likely that no writing has ever saved you. That you were the one doing the saving. That the very act of saving something else is the thing that saved you; those holy moments where someone tells you about a profound experience, and you nod and say, I have experienced something like that.

Maybe that’s the real secret of memoir, of literature: it will always fall short. It needs to fall short, so that a reader can take something new and real out of the hopelessly broken words. So that they can know a mountain that I will never know. So they in turn can start to share their mountain with someone new who will see their own mountain. And on and on and on.

It needs to fail so we can stand at the foot of the mountain and tell it, “I see you.” And the mountain will know we can’t, not really. But maybe it’s the attempt that will keep on saving us.
_____

Jacob Little is the Managing Editor of Brevity and a PhD student at Ohio University. His recent nonfiction is published or forthcoming in DIAGRAM, Split Lip Magazine, Gigantic Sequins, and Yemassee.

§ 13 Responses to The Power of Failure in Memoir

You are currently reading The Power of Failure in Memoir at BREVITY's Nonfiction Blog.