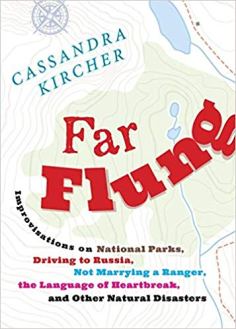 Don’t judge Far Flung: Improvisations on National Parks, Driving to Russia, Not Marrying a Ranger, the Language of Heartbreak, and Other Natural Disasters by its cover. Or by its playful subtitle, or its slim profile. A jaunty cover and jacket copy might imply Cassandra Kircher’s first collection of essays is breezy, travel-focused and quick to digest, but the opening essay unveils a darker and more nuanced book. Kircher’s essays spring from and interrogate her experience in wild places, first as a kid in a camping family, later as the first female patrol ranger in a remote district of Rocky Mountain National Park. Kircher’s book is no easy roam through feel-good girl-power woods narratives. She traverses complicated terrain: a wounded family, the limits of her own empowerment, and the complexities of human adventuring.

Thank God for that! If I see one more woman-in-nature book praised as “badass” or focused on “living the dream,” I may give up reading them altogether. As a trail designer, mountain traveler, and wildlands addict, I am in many ways the ideal audience for this genre. But I’m also a tough critic. I have a low tolerance for nature writing that falls flat, gets mired in cliché, or reads more enamored of self than world. And enough with the badass trope, which turns every triumph or effort into a gender performance instead of an experience. Why can’t we just be women, throwing ourselves into the world? Kircher shows us we can.

Yes, the book covers road trips, Park Service jobs, and weeks at remote cabins, but also gives us essays on the draw of the back-country garbage pile, or “National Parks deaths” (“fall from rock during night,” “disappeared in snowstorm”). I found the book’s most interesting journey the one into the depths of a family with a depressive, mercurial but loving father. The relationship between parent and child and of both to nature, recurs throughout the essays, sometimes the focus, other times a refractive lens. This subtle choice anchors the collection with a through-line both relevant and moving: “There is, I suspect now as I move along the trail, a way that nature can make you strong enough to survive a father like mine.”

Any successful book is built on good prose; Kircher’s is inventive and supple, not over-written. About waking up on a childhood camping trip she writes, “The next morning my body feels the lines on the air mattress, and I smell earth and canvas. The sun is gold and awake.” As an adult, she drives with her father across a frozen lake and thinks, “At that point my heart will acknowledge the weight that has been handed down to me. It’s a weight that could crack any surface, still pull me under.”

Kircher’s gaze is also outward; she invites other thinkers and doers into her essays, many of them notable women, from Agnes Vaille, the first female summitter of Longs Peak, to Joan Didion, writing on the Hoover Dam, as well as E.B. White, Virginia Woolf, and John Muir. A certain pragmatism runs through as well; she tells us the best ways to remove trash from a firepit or how to call in a fatality on the radio, her insider’s view showing us park as workplace, not just respite.

So many books about epic adventures fail to capture a place’s specificity. Plants and animals and weather become generic backdrop instead of its truest inhabitants. Kircher paints her set with the exactness of the high Rockies and the lake-pocked Midwest: “the darkening color of the gray-green Engelmann spruce”; and lightning—“it’s quick: a wide line of neon fire so close I can’t see it.” As a resident of the subarctic and an ardent fan of tundra plants, I underlined this passage: “It’s no rural legend that alpine flora grows in slow motion. Dwarf willows a few inches tall may be over a hundred years old. Lichens scraped away by a boot take three decades to grow back. The tundra is old fashioned and naked. Wiser than any rain forest. More delicate than fine china.” Hers is a deep, considered literacy.

We are all drawn to books whose details overlap our own experiences, and this one does for me. When Kircher arrives at a favorite backcountry spot, she “feel(s) as if I’m hooked back into a web where everything fits.” I know exactly what she means. But I also love books that resonate across vast differences. My father is not a brooding presence in my backstory. I don’t have adopted children. Sarcastic and antsy, I was never “park ranger material,” and stuck to the trail crew, mostly invisible. No matter. The essays that diverged from my immediate experience drew me in with equal pull, showcasing how a nuanced narrative invites universality.

Whatever your overlap of background is with hers, Kircher is an inviting guide. Absent ego, she is not interested in grand views or bragging rights, but in the ground, stable and shaky, where fathers, bears, and all the rest of us, make a stand.
__

Christine Byl is the author of Dirt Work: An Education in the Woods, a finalist for the 2014 Willa Award in nonfiction. Her prose has appeared in Glimmer Train Stories, The Sun, Crazyhorse, and other journals. She lives in Interior Alaska.

§ One Response to A Review of Cassandra Kircher’s Far Flung

You are currently reading A Review of Cassandra Kircher’s Far Flung at BREVITY's Nonfiction Blog.