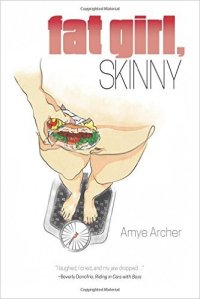 I’m working on a memoir about mental illness, and, at times, the process feels like a long, combative, and slightly schizophrenic therapy session. One part of me lies on the couch, reluctant to divulge details. The other part of me sits in the chair, pen poised, grilling my prone self: What did you mean by that? Are you telling the truth? Why are you so defensive? What’s wrong with you?

The analyst part of me can be rather brutal. That’s why me, quivering on the couch, eventually pops up, storms to the door, and cries, You’re just trying to embarrass me. While me in the chair shouts, Wait! We were just getting to the good stuff.

After a few hours of this, I sit back and wonder, have I at last fallen into the black abyss?

Reading Amy Archer’s sassy memoir Fat Girl, Skinny (Big Table Publishing, 2016) gives me the sense she’s experienced something like this. It takes some deep digging, self-exploration, and personal wrestling to arrive at this level of honesty and self-deprecating humor. And, of course, this is what makes this book such a page-turner.

Archer’s story begins when her husband leaves her for another woman. To retaliate, she launches on a campaign to lose 100 pounds. Pantsuit Pam at Weight Watchers tells her to face the group and explain why she’s losing all this weight. It’s WW’s philosophy that healthy, long-term weight loss stems from a sincere personal drive to improve one’s health and happiness. However, Archer’s highly spirited and independent nature eschews conformity for conformity’s sake. She spells out her situation: “My husband left me. He’s dating the woman he left me for. I want to lose a shitload of weight so that when I see him again he wants me back. It’s pretty simple really.” She doesn’t say that when she lures him back, she plans to dump him so he will know how it feels.

Readers will find Archer’s weight-loss journey something like a white-knuckle ride on a runaway train. She drinks to excess, rekindles bad relationships. She starts up affairs with inappropriate men, and when she meets a man who turns out to be a trusted ally, she pushes hard for a romance. “He reminds me again and again,” she writes, “he is cemented in his life as a local musician and can never be the boyfriend I’m looking for.”

When she loses fifty pounds, she says, “Even though it’s barely ten degrees outside, I’m stretching the boundaries of the professional dress code: tight T-shirts, short jean skirts, anything to show off what I have accomplished. Anything to help snare a man. My coworkers are looking the other way, but the whispers are accumulating around the perimeter. What is she wearing? How much weight did she lose? Not that much.”

It takes a lot of courage to write many of these passages, and Archer says as much in an interview at the end of the book: “There are parts of this book that still make me cringe. I read it and I find myself yelling at that stupid girl in the backseat of someone’s car. But I had to be honest. I had to try my best to capture the true way in which food addicts live: binary. We are either sober or not sober, in control or not in control. There is seldom a middle ground.”

Obviously Archer is more than remaking her physical self. She mines all the hurt and disappointment that stretch back to junior high, when her life first spun out of control.

From page one, Archer uses wit and honesty to engage readers in this convoluted quest to remake herself and find a loving, lasting relationship. As Pantsuit Pam tries initially to show her, counting points goes only so far in a genuine and complete transformation. Ultimately Archer learns that a lasting change and happiness results from changing within: understanding and truly appreciating all facets of one’s true self.

Debbie Hagan, book reviews editor for Brevity, is working on a memoir about mental illness. She is author of a creative nonfiction book Against the Tide. Her essays and prose have appeared in Hyperallergic, Brain, Child, Boston Globe Magazine, and various anthologies.